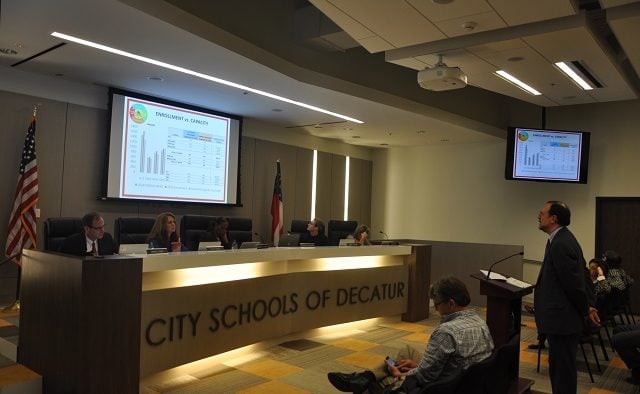 Consultant Tom Sayre delivers a presentation to the City Schools of Decatur Board of Education on Nov. 5, 2014. Photo by Dan Whisenhunt
Share

A consultant for City Schools of Decatur made a surprising revelation during the Oct. 13 School Board meeting.

Projected enrollment growth will be slightly lower than first thought, but still enough to justify passage of a bond to fund school construction.

Tom Sayre from the Sizemore Group consulting firm made a presentation during the meeting. One slide shows a projected enrollment of 6,296 students in 2020, 231 less students than he projected back in November. Sayre said even with that difference, the $75 million bond referendum won’t be sufficient to build enough schools pace to hold the projected number of CSD students in each grade level.

Here is the full presentation delivered at the Oct. 13 meeting:

After the meeting, Sayre said there are two reasons for the lower projections.

“There is a lower birth rate that occurred in the years 2010, 2011, 2012, so add five years and they’re entering into the school system,” Sayre said. “The second thing is in the current school year there was a lower than projected enrollment in certain grades and the way we calculate the future is we look at the current trends and project them out. So with the current growth at certain grades, it affects, not only does it make those particular grades smaller than what we thought they would be, it also means the relationship between that grade and the previous grade drops, so we anticipate fewer children move from one grade into the next.”

So why was enrollment in certain grades lower than expected?

“What is the reason for the drop? I would be speculating to tell you,” Sayre said. “My speculation is that the adjoining areas are beginning to see an improvement in their school systems which Decatur has enjoyed for more than 10 years, and there is therefore less motivation for parents to move into Decatur than there once was. That is on the margin. We’re not talking a huge number, just enough to change by a couple of hundred kids.”

So the $75 million bond referendum is still needed?

The $75 million bond referendum will be on the ballot Nov. 3.