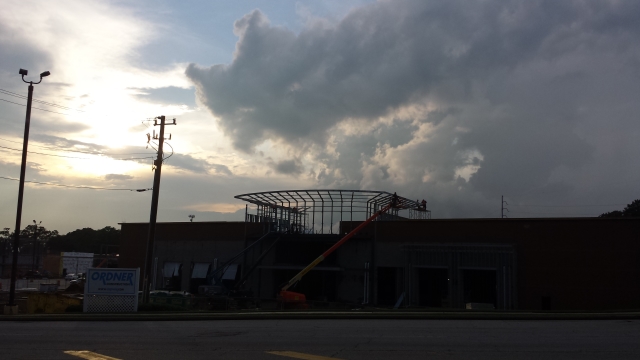 Bill Stogner with Selig Enterprises says LA Fitness is expected to open no later than mid-December. Photo by Dena Mellick

Walmart and LA Fitness will open this year in the newly-redeveloped Suburban Plaza on Church Street and North Decatur Road.

Bill Stogner, Senior Vice President with Selig Enterprises which is developing the retail center, told Decaturish that Walmart will likely open November 11, and LA Fitness will open by December 1, though dates are subject to change.

Stogner said HomeGoods and Jo-Ann Fabric and Craft Stores will potentially open around March. “Ross Dress for Less will open up probably in June,” Stogner said. “The rest of the center will probably open up the first part of spring.”

“We have a Louisiana-style Cajun restaurant committed to the project,” Stogner said. “We’ve got a pediatric dental company coming in on the Church Street side.”

The Comet Pub & Lanes, the new name of Suburban Lanes, which the owners of Twain’s have taken over, may not be open this fall as initially expected. Stogner said he thought the bowling alley would open its doors early next year.

“We don’t know the exact date, because they haven’t started construction yet,” Stogner said. “There is quite a bit of construction there.”

Demolition has been under way at the bowling alley, according to Instagram updates.

As Decaturish previously reported, Moe’s and Pizza Hut are staying in the development, along with the uniform shop and the hearing aid company. Starbucks, a nail spa, and a barber shop will be added to the center.