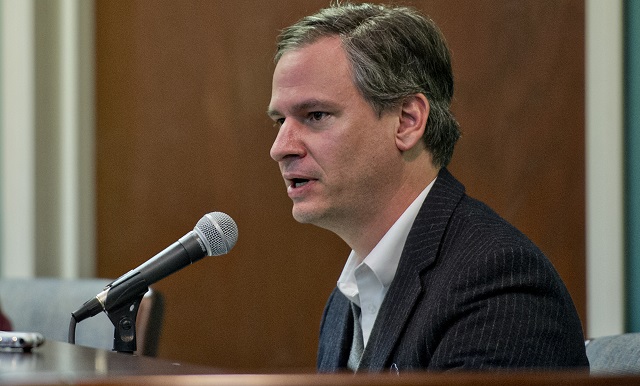 Todd Pullen said she shares a lot of similar ideas with the man who beat him in the March mayoral election, Jonathan Elmore.

Pullen is running for political office in Avondale Estates again, this time as a commissioner. He will be on the ballot in the Nov. 3 municipal elections. The other candidates are incumbent, City Commissioner John Quinn and fellow challengers Brian Fisher, John Pomberg and Adela Yelton.

Elmore is running unopposed this year.

“I definitely think I’ll be a great support to Mayor Elmore,” Pullen said. “I think we have a lot of similar ideas. I think there will be some great momentum with us being a team, as well with some of the other candidates who are running. I think it will just be a really good fit and a good opportunity for the city to move forward, especially with the downtown development aspect of it. That’s still one of my primary interests.”

Pullen works in high-end residential design with Frank Neely Design Associates. He discovered Avondale Estates 17 years ago, and moved to the city. He served on the city’s Historic Preservation Commission from 2002 to 2012. He lives in Avondale with his partner, Lee Nicholls, and her two daughters, ages 10 and 13.

He told Decaturish earlier this year that while serving on the Historic Preservation Commission, he became concerned as the city got more deeply involved with Century/AG Avondale, LLC, a developer behind a mixed-used project that eventually wound up in bankruptcy court. He said the failure of that project proved costly to the city and it is only now starting to recover. Pullen said Avondale was, “putting all of our eggs in one basket the company couldn’t survive and we put ourselves into a ghost town for the next five years.”

His focus hasn’t changed much since the mayoral election and he remains committed to helping downtown grow.

“I definitely want to continue paying attention to the green space and the four acres that the city has and just improving the downtown in general, trying to … provide more interest and continue to support the businesses that are there, especially the arts and the restaurants,” Pullen said. “I know some of the restaurants are struggling a little bit and if we can get more attention and present Avondale as a more desirable destination spot that would help everybody.”

Editor’s note: Decaturish is writing a short introductory article about each candidate running in the Nov. 3 municipal elections.