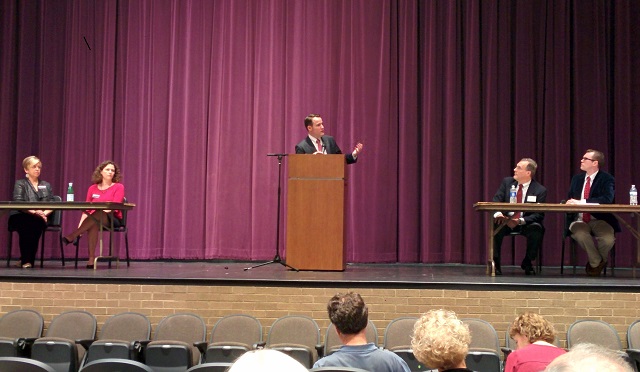 This Nov. 3, voters in the proposed city of LaVista Hills won’t just be voting to join a new city or remain unincorporated.

They’ll be rendering a verdict on one of two philosophies about government. Both were on display Wednesday evening, Sept. 30, during a forum at Lakeside High School. If approved by the voters, LaVista Hills would have over 65,000 people. It would be bordered on the north and west sides by I-85 and bisected by I-285.

Opponents of LaVista Hills argue that new cities are another layer of bureaucracy and politics on top of a county that’s basically a rabbit hole of government shenanigans. The report released by special investigator Mike Bowers on Sept. 30 teems with the possibility of uncovering even more corruption in DeKalb. But even new DeKalb cities like Dunwoody and Brookhaven are susceptible to suspicious spending and contract awards, according to an article that ran in the Atlanta Journal Constitution in January.

“You do not solve the problem of corrupt politicians by adding new politicians to the mix,” DeKalb Strong President Marjorie Snook said.

But the other side of the argument is that local governments are inherently more accountable and accessible to the people they serve. Cityhood proponents argue they’ll deliver services more effectively and put residents closer to their elected officials than they are in DeKalb County. They point to Bowers’ report as evidence that DeKalb hasn’t changed its ways. Even the interim CEO Lee May, who hired Bowers to root out corruption, was accused of abusing his office and asked to resign. Perfect government, cityhood supporters argue, isn’t possible under any scenario. But better government? Definitely possible, cityhood supporters say.

“This is not a theoretical debate,” LaVista Hills YES! chairman Allen Venet said. “This is really a very simple choice. People when they go into the voting both can vote no, which is a vote for the status quo.”

Dan Chapman, another member of LaVista Hills YES! said that it is not another layer of government.

Pat Killingsworth, a member of DeKalb Strong, said that legislation has passed in the General Assembly this year that addresses many of the concerns in state government. On the Nov. 3 ballot in addition to cityhood, there will be a ballot question about reforming DeKalb’s ethics board. The Legislature also revised the county’s purchasing rules and provided for an independent auditor position.

“There is a new status quo,” Killingsworth said.

In this video: Both sides discuss campaign contributions.

In this video: State Rep. Scott Holcomb, D-Atlanta, asks if anyone has expressed an interest in running for LaVista Hills City Council.