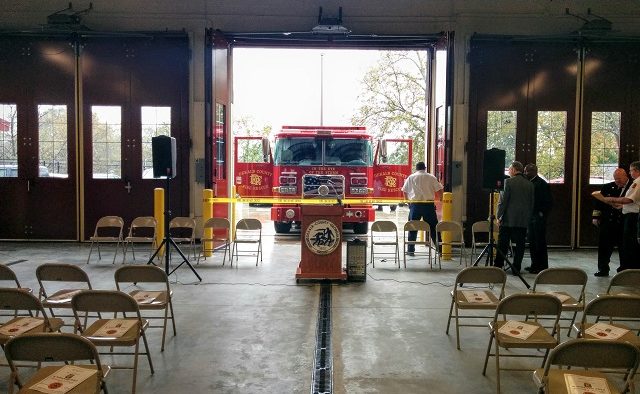 The bay doors open to reveal a fire truck in the newly rebuilt fire station No. 3 in Avondale Estates. Photo by Dan Whisenhunt
Share 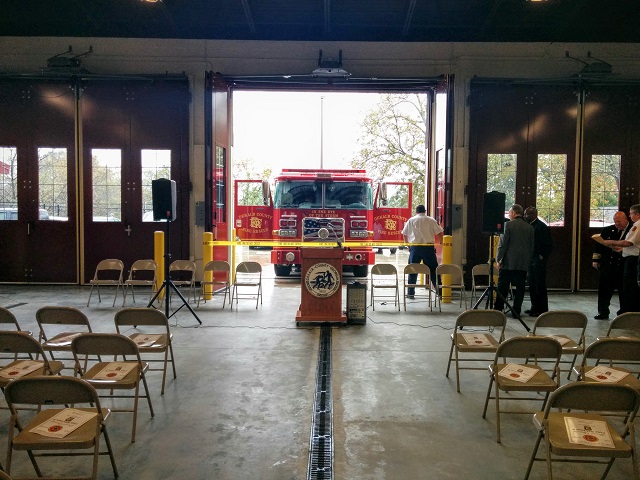 The bay doors open to reveal a fire truck in the newly rebuilt fire station No. 3 in Avondale Estates. Photo by Dan Whisenhunt

Avondale Estates has gone 17 months without its fire station on Clarendon Avenue.

The old building, worn down after nearly 70 years of use, was torn down. On Monday, Nov. 9, the public got the chance to tour the brand new building erected in its place. The spacious fire truck bays kept everyone dry during a ribbon-cutting ceremony attended by city and county officials. The doors open swiftly to the side, as opposed to the traditional bay doors that roll up.

“If someone doesn’t know where to go, they can come to a fire station,” Fullum said.

There’s also a new community room that will be available to whoever needs to use it.

The station, which cost $2.6 million to build according to DeKalb County Commissioner Kathie Gannon, was completed on time and on budget, county officials said. Standing in the cool shelter of the fire truck bays, Gannon said, “It’s better to have the rain at the end of this development rather than at the groundbreaking. That would’ve been fun.”

Gannon said three bricks from the old station were left on the site, as tribute to the new station’s predecessor.

“The old station served Avondale well for 70 years,” she said. “We look forward to this station serving us well for well over 70 years.”

Commissioner Nancy Jester also spoke, saying “It is always great when I get to be among the heroes” who work as firefighters. The commissioner who represents Avondale, Commissioner Sharon Barnes Sutton, was unable to attend due to a prior conflict. CEO Lee May also couldn’t make it. Both sent their regards.

The station is also intentionally bigger than what was needed, with more bunks than needed for the four to six firefighters who staff it each shift. Some of the fire trucks barely fit in the old bay. Now there are three bays, which means room to grow, Fullum said.

“It allows for the opportunity for us to expand,” he said.

Mayor Jonathan Elmore said the city was glad to have its fire station back.

“We’re just happy to have a new fire station, have the firemen back around,” he said. “I mean everybody loves firemen. It makes everybody feel safer to know that this station has expanded functionality with the community room, a better place for firemen to live and do their thing. We’re just really happy about that.”