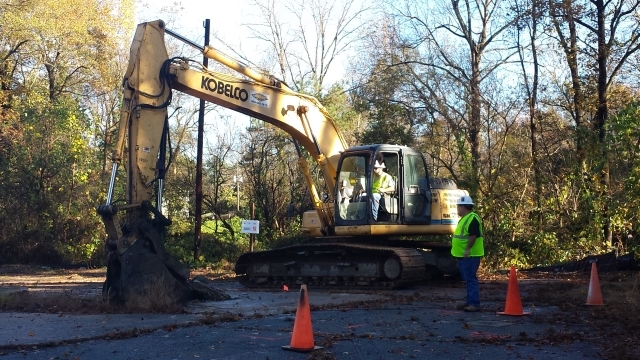 Work has begun on the East Decatur Greenway site – an abandoned gas station that had become an eyesore.

The East Decatur Greenway, a nonprofit, acquired the site at 890 Columbia Drive and plans to turn it into a portion of the PATH for bicyclists and pedestrians to connect to the Avondale MARTA station. But first it must clean up petroleum contamination on the property.

In an email, director Michele Ritan told Decaturish, “The actual remediation began this morning, after a few weeks of getting the required county permits. … The smell of petroleum as the soil is exposed is very strong! The contractor anticipates that the process will take 4-6 weeks to complete, weather permitting, of course.”

The East Decatur Greenway was awarded a grant to clean up the site in May 2014.

Ritan said, “It really is a dream come true for this community, one that has taken years to realize. It would not have been possible without united community support, the backing of elected officials (Commissioners Johnson and Gannon, former state Rep. Stephanie Benfield, state Rep. Karla Drenner, Region 4 EPA, Georgia EPD.)”