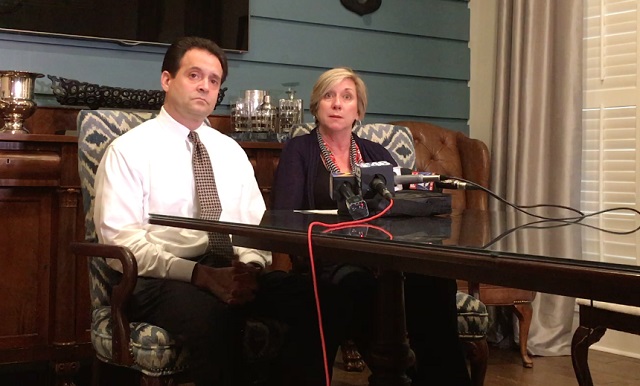 Kevin Levitas and Mary Kay Woodworth, president of LaVista Hills Alliance, expressed their concerns regarding the potential voting irregularities being investigated by the Georgia Secretary of State. The group has retained counsel to explore its legal options to challenge the validity of the vote. Photo by David Schick
Share

Kevin Levitas and Mary Kay Woodworth, president of LaVista Hills Alliance, expressed their concerns regarding the potential voting irregularities being investigated by the Georgia Secretary of State. The group has retained counsel to explore its legal options to challenge the validity of the vote. Photo by David Schick

The LaVista Hill Alliance announced today that it has retained legal counsel after allegations of voting irregularities in the Nov. 3 election raised doubt about the outcome of the cityhood referendum.

The Georgia Secretary of State and Bureau of Investigation are looking into the matter.

“We are very concerned about these allegations,” said Mary Kay Woodworth, president of the Alliance.

The Alliance has retained attorney Douglas Chalmers Jr., who specializes in political law and litigation.

Woodworth said the Alliance’s attorney would explore any legal option available to citizens to challenge the validity of Tuesday’s vote. She is also asking for any potentially disenfranchised voters to report any incidents or problems to the LaVista Hills Alliance Facebook page, its website, or to call 470-223-2015.

“The gathering of information has just begun,” she said, adding that they are looking for “very specific” information from voters who were directly affected, not third-party tales or “hearsay.”

Kevin Levitas, a supporter of the Alliance, said, “The question is not whether this referendum has passed or not,” adding that it’s about whether or not the voting process was tampered with. “The important point is to get it right.”

He added that the LaVista Hills vote was a “razor-thin majority” and, given the concerns about Tuesday’s outcome, the Alliance wants to know the truth about what happened.

“Everybody says at every election that every single vote counts,” Levitas said. “It truly did in this election.”

The Alliance retained counsel after the Georgia Bureau of Investigation confiscated voting equipment — as part of a state probe into alleged voting irregularities — from DeKalb County.

But DeKalb County election officials said they are confident that the investigation will reveal that the voting process was legitimate — and followed proper procedure.

“The DeKalb County Board of Registration and Elections’ sole purpose is to ensure the integrity of all elections in accordance with Georgia election code. We recognize the seriousness of the allegations made and are cooperating fully with the Secretary of State’s office as they investigate the claims made. We remain convinced that once the investigation is complete, the veracity of the November 2015 elections will be confirmed. Until the Secretary of State completes his investigation we have no further comment on this issue.”

This early into the investigation process, Levitas said, the county election officials “could not possibly know” the entire body of evidence. He called the comments “inappropriate” since there was so much work to be done to find out what actually happened.

The county certified the election results Friday, which triggered the need for the LaVista Hills Alliance to hire counsel. According to Woodworth and Levitas, they have five days to file a legal challenge following the certification.

However, according to state law, the election results could still be invalidated if the investigation reveals any improprieties in the election process

Thus far, voter complaints over the LaVista Hills vote include:

– Absentee ballots that were either discounted or not sent to military personnel.

– A locked door that kept voters out at one precinct.

The Atlanta Journal Constitution reported that there was allegedly a memory card that wasn’t secured at the Briarlake Elementary precinct.

Georgia Secretary of State Brian Kemp ordered the probe of the election results after a senior DeKalb Board of Elections official complained about the integrity of a voting machine in one precinct.

In an email exchange — obtained by Decaturish — Lenoard Piazza, the DeKalb election official, told LaVista Hills political consultant Steve Schultz he was on administrative leave because of the questions he raised about the referendum. His superior, Maxine Daniels, said he was placed on leave because of an unrelated personnel issue.