Meeting to review draft of diversity plan is big on diversity, short on draft

Meeting to review draft of diversity plan is big on diversity, short on draft 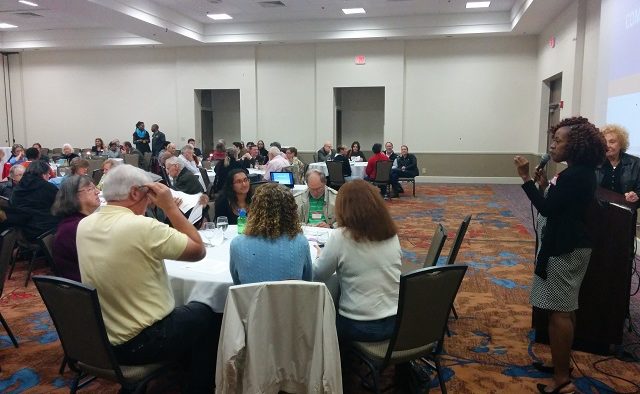 City consultant Mattice Haynes speaks during a meeting held at the Marriott in downtown Decatur on Nov. 12.
Share 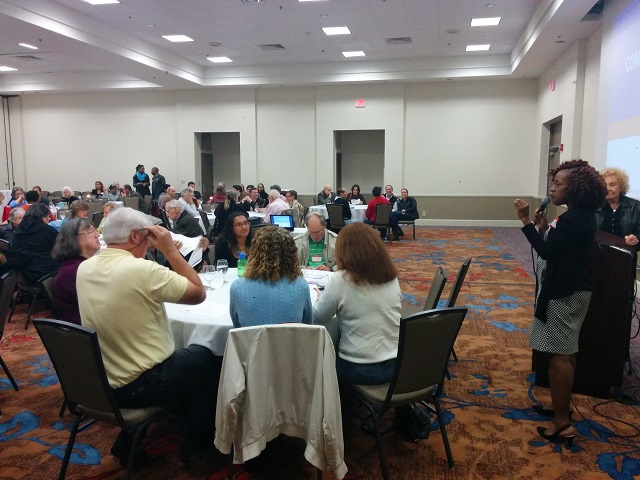 City consultant Mattice Haynes speaks during a meeting held at the Marriott in downtown Decatur on Nov. 12.

A community meeting to review and comment on a draft of a Community  Action Plan to make Decatur more diverse didn’t quite live up to its billing.

There was a lot of talk about diversity, but no draft plan to speak of. Instead organizers handed out a list of about 70 different action items to the people sitting at the round tables in the conference room of the Decatur Marriott. The list came from input at community meetings organized under the auspices of the city’s Better Together campaign. Because it was passed out at the end of Thursday’s two-hour meeting, there was no real opportunity to comment about any of the recommendations.

Among the action items intended to promote diversity in the city of Decatur:

– Residents are encouraged to join their neighborhood associations.

– Community organizations are being asked to host conversations on race equity and inclusion.

– The city’s government should “conduct an equity assessment of the city’s internal structures, processes, policies and outcomes.”

– The city should also “create a system for addressing community members’ concerns and complaints related to issues of equity and inclusion. Ideally this system could be accessed online and by phone and would insure that problems are thoroughly documented and responded to quickly by a designated staff person.”

– The city should “engage citizens in creating a new tagline that reflects the city’s commitment to inclusion and equity.”

– The city should invite a more diverse group of people to serve on volunteer boards, commission and to apply to the Decatur 101 class.

– Another item recommends the city “Establish Better Together as a permanent city initiative to nurture and sustain a culture of inclusion, equity and justice.”

– Related to that, “Designate a city staff person to manage and advocate for Better Together Community Action Plan implementation and strategic plan accountability.”

– The city could write a regular Better Together column in the city-produced Decatur Focus and other media outlets to keep the community informed about the campaign’s progress.

The action plan has been almost two years in the making, sparked by allegations of racial profiling by police officers that were raised back in January of 2014. Former School Board member Don Denard said he had been profiled, and other black residents and visitors soon came forward with their own stories.

There are several recommended action items related to policing:

– Organizations should use resources provided by the police department to distribute information related to community policing and when to report suspicious activities.

– The city’s police department should post its “anti-racial profiling policy and procedures” on the front page of the police department’s website. The department should also publish the number of arrests and stops and note the race of each individual involved. The city should provide comparative statistics to see how those trends compare with DeKalb County, Metro Atlanta and other jurisdictions.

In her opening remarks, City Manger Peggy Merriss told attendees that the time spent on the plan has been the most valuable contribution.

“Time is a very special thing,” Merriss said. ” … No one has invented a way to create more time.”

The city’s consultant, Mattice Haynes, passed the time by leading the audience through a Power Point presentation recapping the process that led to Thursday’s meeting. Haynes’ company, the Art of Community, received a $109,000 contract from the city to create the Community Action Plan that was supposed to be discussed on Thursday. The city’s announcement for the Nov. 12 meeting said, “That (Community Action Plan) draft will be available for community review and comment.”

On the way through the door, attendees were given “social bingo” cards meant to spark conversations between strangers. One of the tasks was “Find someone with different colored eyes than you.” Another asked, “Warm weather or cold weather?” and then advised participants to “Find someone else who likes what you like.”

The meeting was interrupted two times by retired Decatur High teacher Chris Billingsley yelling questions to Haynes about how someone can object to what’s in the plan. Haynes invited Billingsley to a one-on-one conversation, and other attendees told him he was being disrespectful.

During another portion of the meeting, the audience traded cards containing one of the 70 proposed action items. Attendees were asked to give the action item a ranking.

At the meeting’s conclusion, Haynes passed out the list of 70 items that will form the “core” of the plan.

“The plan document itself it will be much more comprehensive than this,” Haynes said.

The final draft will be considered by commissioners on Dec. 7.

Here are the action items distributed at Thursday’s meeting: 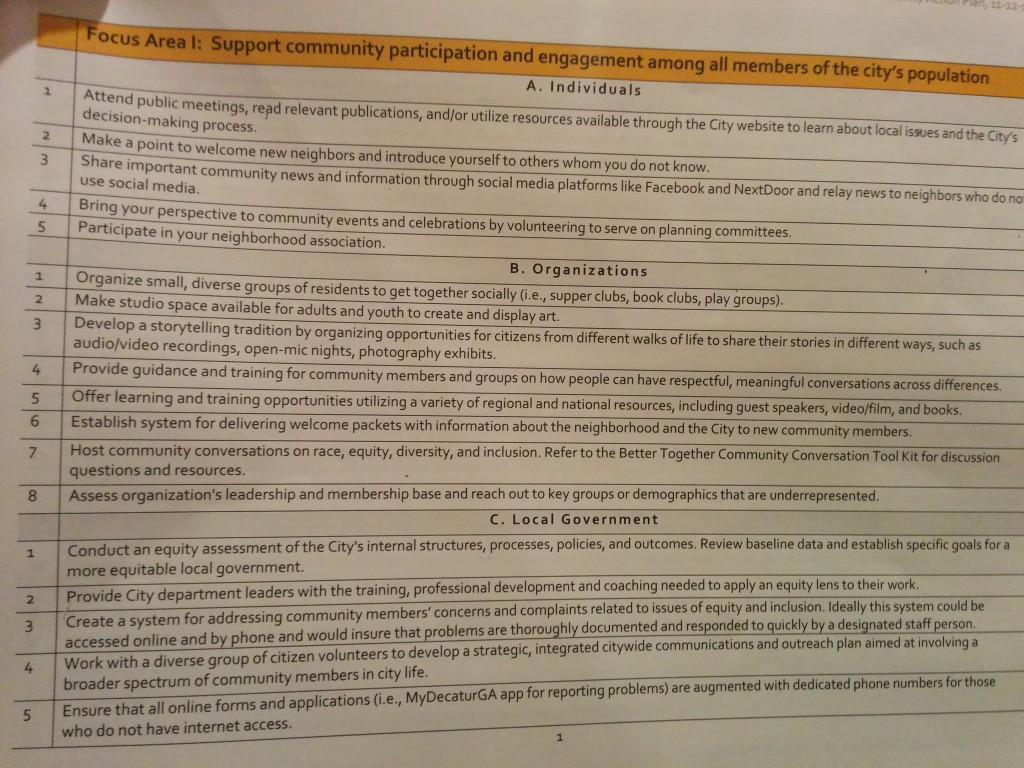 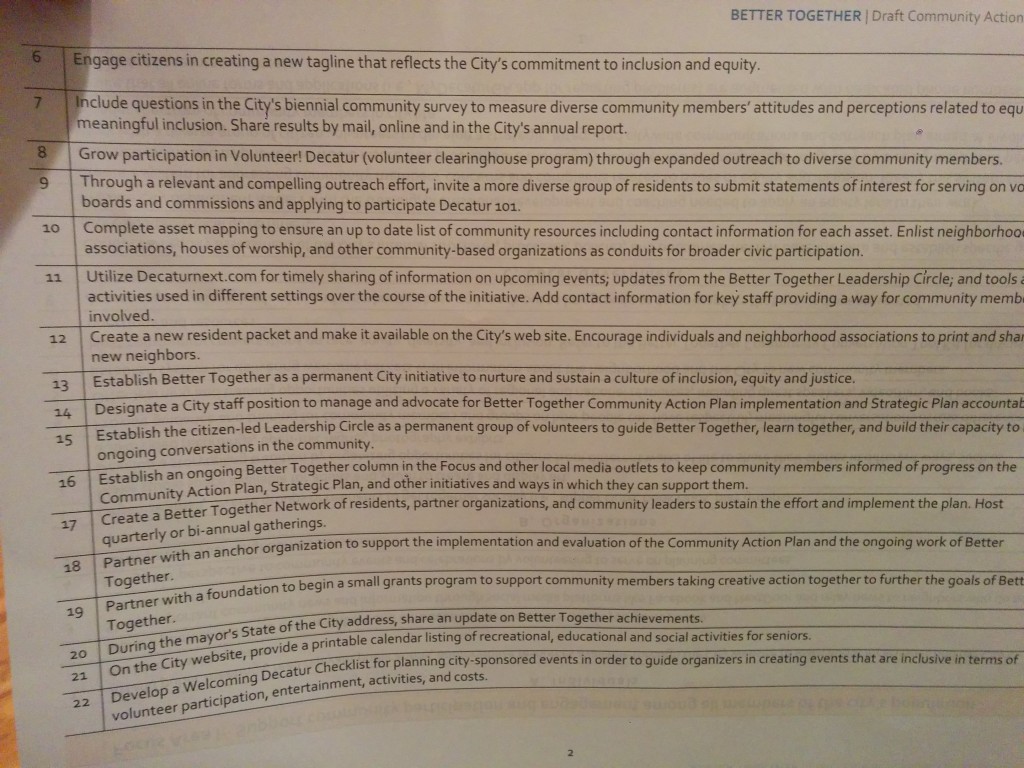 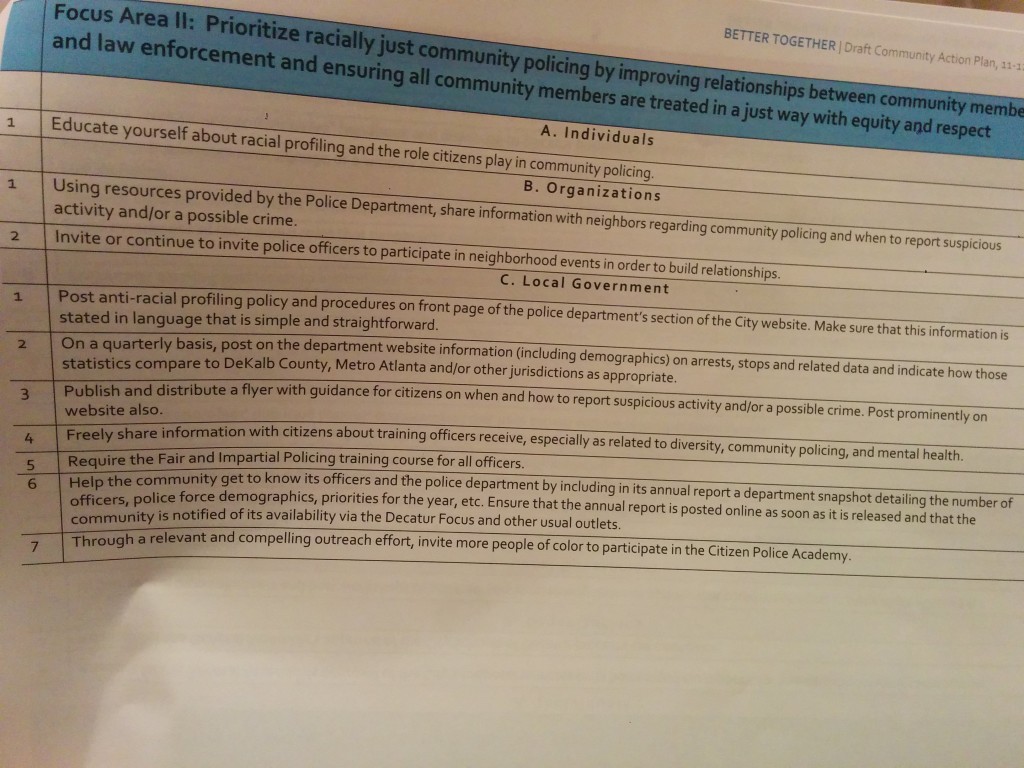 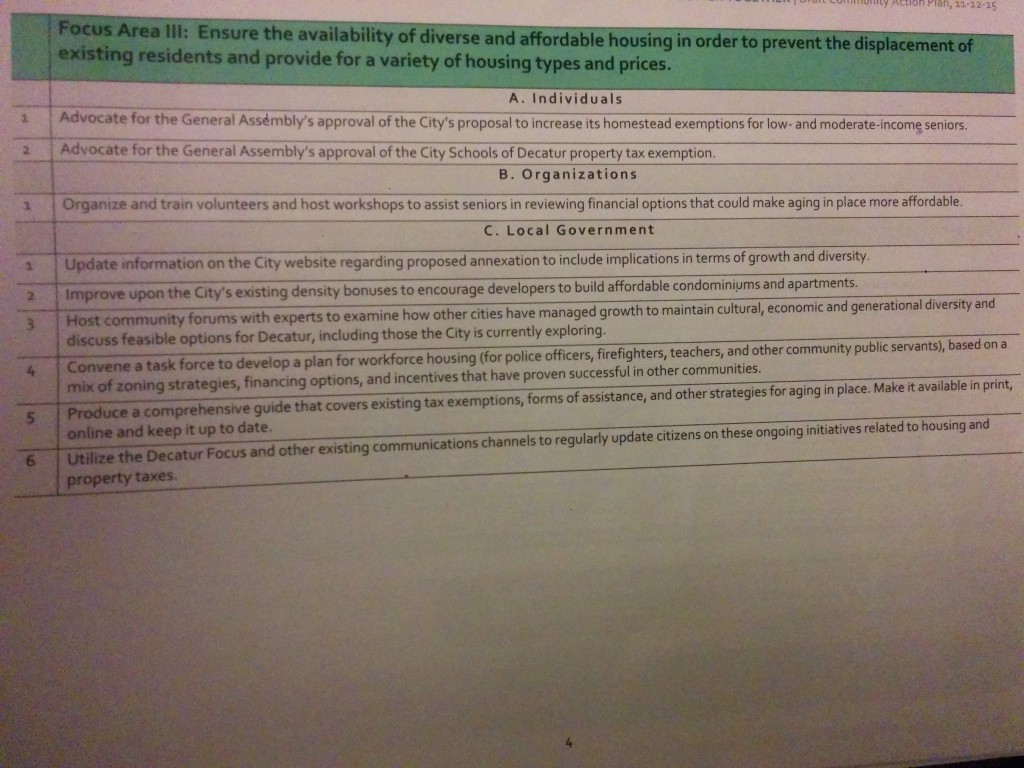 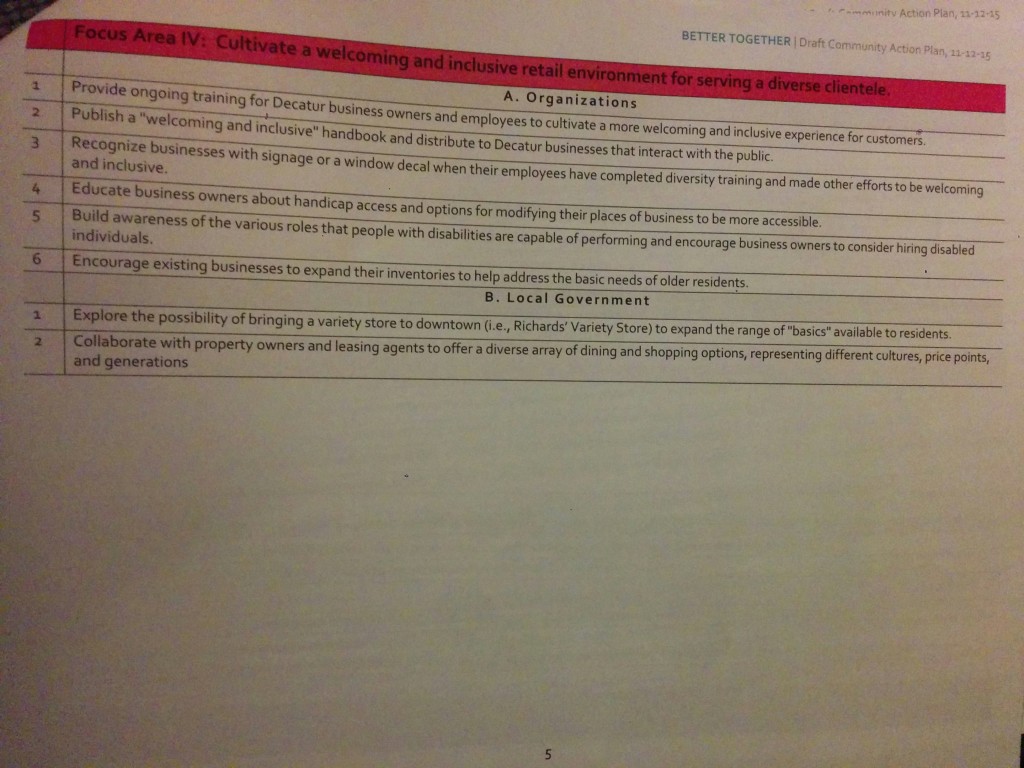 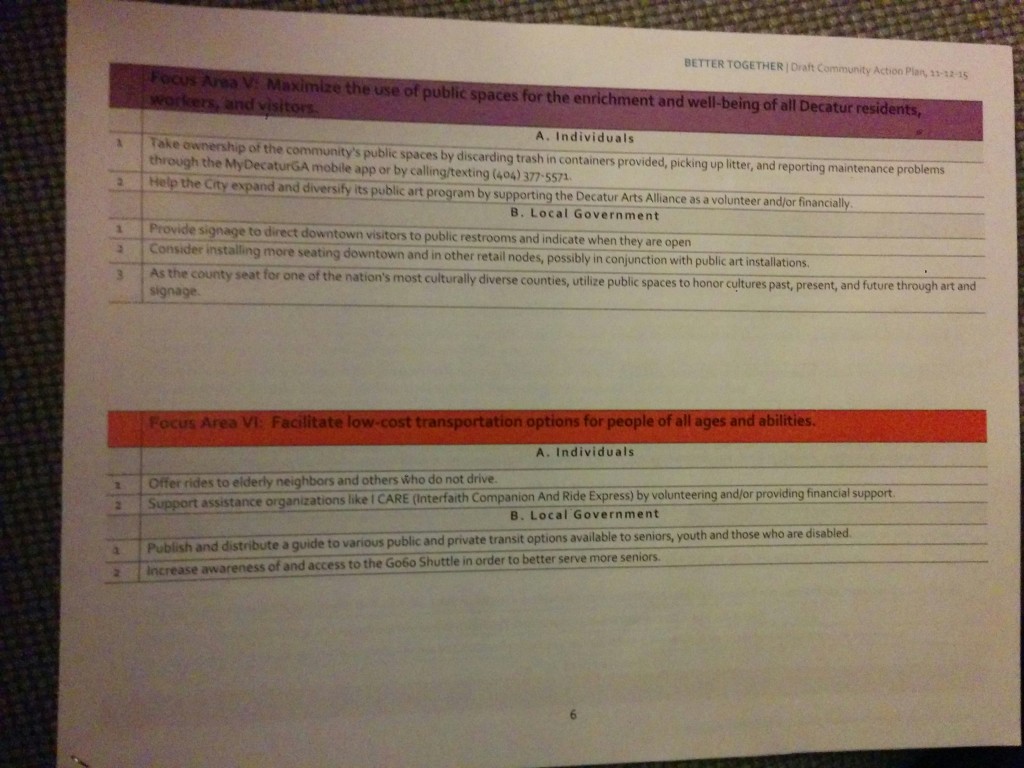