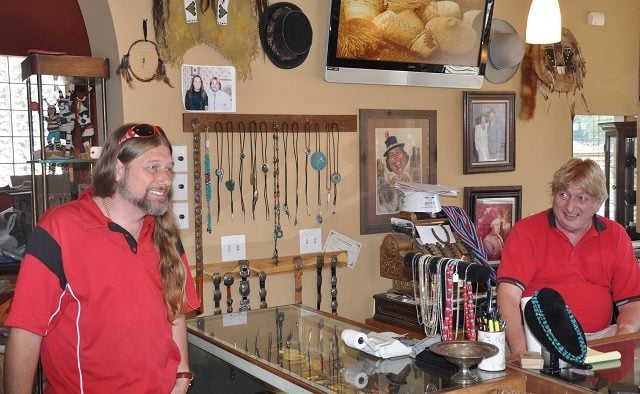 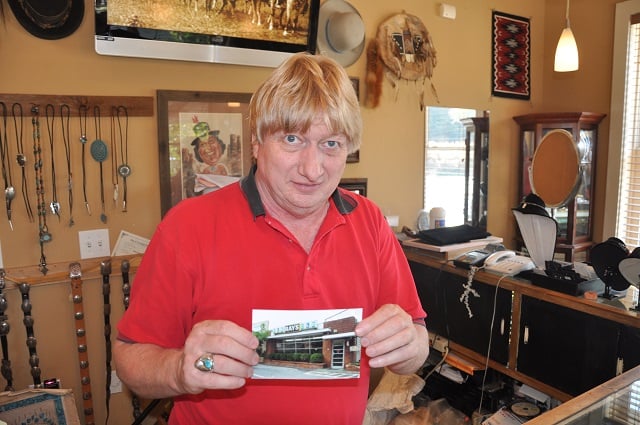 Mark Belcher holds up a photo of the old Ray’s store. Photo by Dan Whisenhunt

The announcement came in a city email, which said, “What started as a radio and jukebox repair business by Ray Belcher in 1948 evolved into a family-operated Native American gallery, Ray’s Indian Originals, by 1972.”

Earlier this year, Avondale Estates recognized the family of Ray Belcher, the man behind Ray’s Indian Originals, for being in business in the city for 66 years. State Rep. Karla Drenner, D-Avondale Estates even drafted a resolution on the family’s behalf.

Mark Belcher and his brother Jonathan run the business. Mark previously told Decaturish the family was pleased to see their father’s business recognized. Ray Belcher passed away in 2005, but Mark said the honor meant a lot to their mother, Peggy, who started the American Indian apparel business.

The city email said the Belcher family wanted to thank the residents of Avondale Estates for supporting the family businesses over the years. They also thanked Rep. Drenner for the recognition of Ray’s accomplishments.

The email said the date of an open house to celebrate Native American Heritage Month and to thank the community will be scheduled soon.

Here’s the full announcement from the city:

What started as a radio and jukebox repair business by Ray Belcher in 1948 evolved into a family-operated Native American gallery, Ray’s Indian Originals, by 1972. Over the years, the store had visits from celebrities such as Whoopi Goldberg, Timothy B. Schmit, Kevin Costner and Nelson Mandella. In recent years, the brick and mortar store struggled as the online store flourished causing the owners to make the decision to close their doors on Wednesday, December 30, 2015.

The Belcher family would like to thank all the residents of Avondale Estates for supporting their family businesses over the years. Also, Karla Drenner, State Representative, for having Ray’s accomplishments recognized by the State of Georgia.
The family will be hosting an open house to celebrate Native American Heritage Month and to say thank you to the Avondale Estates community for supporting them over the years. All are invited to attend. Date and details to be announced.