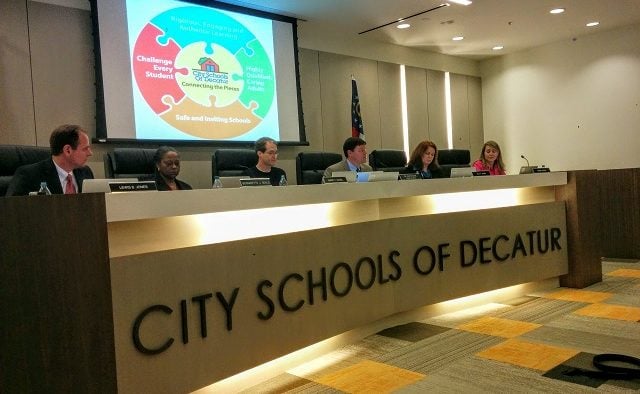 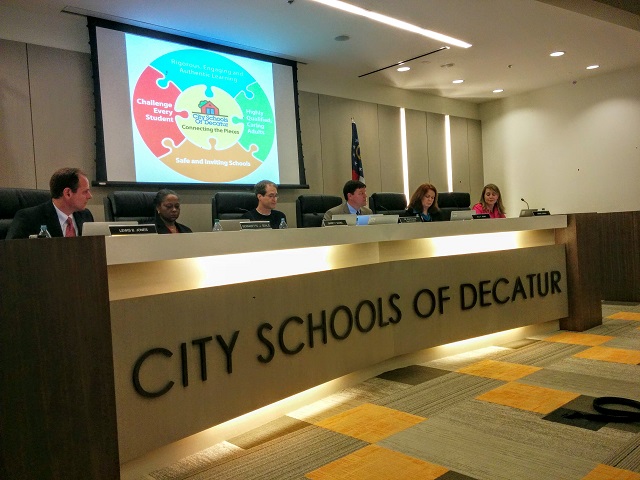 The Decatur School Board says that a proposal to rent East Lake Elementary from Atlanta Public Schools is only an option, not a certainty.

While the school system has a dire need for space in the face of booming enrollment, and renting East Lake had been discussed as an option, board members said they haven’t been involved in lease negotiations up to this point.

Superintendent David Dude, who attended his first meeting on Nov. 10, said there’s a question of whether City Schools of Decatur could legally send students to a school in another district. East Lake has been vacant since 2012, but the prospect of CSD renting it has touched off a conversation about the building’s future.

“There are a lot of issues that still need to be dealt with if we ever decide to move down that road,” Dude said. “There are things like the building is outside of our boundaries and are we allowed to send students there? There are things like who would you assign to go to that? What grade levels is it going to be? Is it going to be a magnet program that would encourage people to go there on their own? Is it going to be something where you take students who are new to the district who haven’t ever had a district home yet and assign them there? There are a lot of issues that need to be worked through there. We are very, very early in the process. I think some people felt it was much farther along than it was and it really is not. If we decide as a board and a community to move down that path, there’s a whole lot of community engagement to do still at this point in order to get that all figured out.”

That’s a different message than the one delivered at the East Lake Neighbors Community Association meeting on Nov. 9. Larry Hoskins, Deputy Superintendent of Operations for APS, told residents that Atlanta School Board could vote on a lease at its December meeting.

“This is an issue we have had virtually no discussions on,” Caiola said. “We knew obviously that this was one of many options that we’ve been talking about. All these detailed questions about who and when and timelines, the process has barely even started. From this board member’s perspective, if we decide that we move forward with East Lake, the process before we did that would look just like every other time in the past where we have opened a new school and we’ve had lots of public input about redistricting and who would be affected and when that would take place and none of those things have even happened yet in terms of discussion.”

Recent enrollment projections delivered to the School Board showed growth in enrollment will be slightly lower than anticipated.

Caiola said, “Last month we got our enrollment report back and our numbers were a little bit lower than what we were anticipating so I think the threshold inquiry is, is it needed as we continue to monitor our enrollment trends and if so, then what is the process going to look like for gathering input and making decisions that will be in the best interest of all the kids?”

School Board member Julie Rhame said she was surprised to see the issue in the news.

“I was kind of shocked that it got out,” Rhame said. “… I was kind of surprised to see that. I didn’t know we were at that level. But that’s OK.”

Board Chairman Garrett Goebel said he’s glad there’s an option on the table for housing students during construction, but it’s only an option.

“We’re so early in the process we haven’t even determined whether or not this would be a solution, if we went down that road whether or not it would require redistricting or not,” he said.