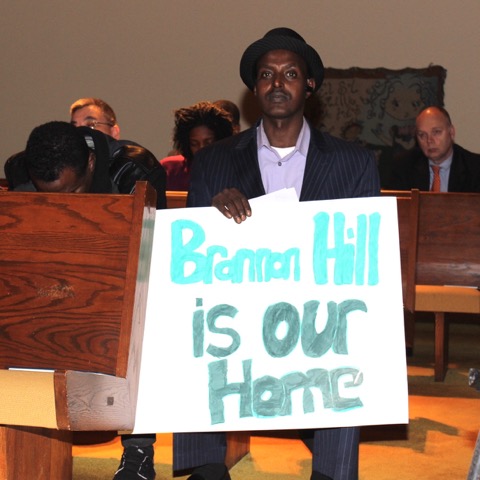 A Brannon Hill residents holds a sign during the town hall meeting. Photo by: Dyana Bagby

Brannon Hill Condominium Complex residents in DeKalb County are desperate for help in cleaning up their Clarkston neighborhood where burned out buildings, piles of trash and debris, open drug deals and violence have been the norm for many years.

DeKalb County Commissioner Sharon Barnes-Sutton, who represents District 4, including Brannon Hill and Avondale Estates, said she formed a task force about a year ago to try to tackle the problems Brannon Hill homeowners have been facing for more than a decade. Many of the Brannon Hill residents are immigrants from Somalia.

“We are working through the red tape and the county and state government and the court system trying to find a resolution that would bring a better quality of life,” she said.

Barnes-Sutton, a commissioner for seven years, said the process is a long, complex one because trying to reach the property owners to mandate they clean up their abandoned units is time-consuming and difficult. She said state laws do not allow county government to clean up private property.

The county law department said it would cost $84,000 to define the property ownership through “in rem,” which bypasses having to take legal action against an individual and instead take it against the property.

Brannon Hill has made national news after being featured in a Vice.com article written by George Chidi.

It was also recently featured in local news after District 1 DeKalb Commissioner Nancy Jester wrote a letter to the DeKalb County Commission making suggestions on how to clean up the distressed property.

Barnes-Sutton took a jab at Jester and Chidi, saying, “I’m never going to do what someone thinks is popular. I’m never going to be the person out there trying to get in the limelight at somebody’s expense with dishonesty.” 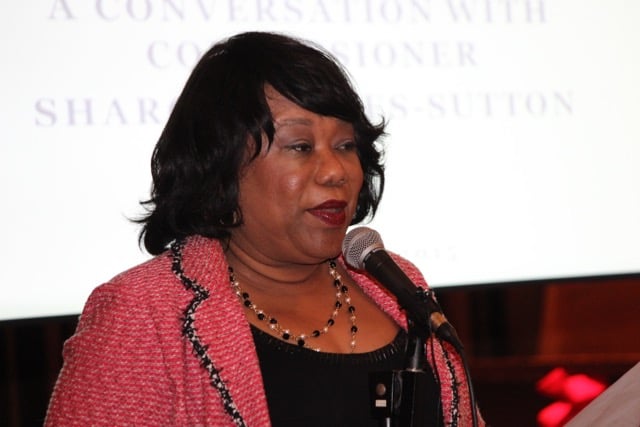 State Rep. Michele Henson (D-Stone Mountain), who sits on the Brannon Hill Task Force, was at the town hall and also stressed how complex the issue is to clean up the condo complex.

When asked after the town hall how often the task force has met and how many people are on it, Barnes-Sutton said the task force meets “about quarterly.” She said there are about 25 members on the task force, including representatives from the County Solicitor’s Office, the District Attorney’s Office, code enforcement, and the vice mayor of Clarkston, who she said represents Brannon Hill residents because there is currently no condo association.

However, residents are trying to revive an association. A representative from the Somali Community Center said he and others did not know about the task force and would like to work with it. He added residents are ready to clean up the community if the county can provide Dumpsters.

A woman who only identified herself as Pat said she has lived in Brannon Hill for 29 years.

“We’re in a situation where we like our community, we love our homes. The inside of our homes are totally different from what you see on the outside. But you have to come from the outside to get inside.”

Barnes-Sutton said the ultimate wish for the task force is for a developer to come in and buy the property from the homeowners.

“They [the developer] wouldn’t be working with us. They would be working with them. That’s much easier than tracking every homeowner down. We were trying to keep [the task force] quiet until we could get this in place,” she said.

George Chidi, who is also a Pine Lake councilman, said after the meeting that Barnes-Sutton was “blowing smoke” by suggesting a developer could fix the problems of Brannon Hill. He also added Barnes-Sutton has barred him from attending the task force meetings.

“This isn’t a new problem. [She’s] been here for seven years. What about doing something during the first six years? Because this is a complex problem there is no political will to fix it,” he said.

‘How does a developer buy Brannon Hill when they would have to negotiate with 168 owners and 1/3 don’t even live in the state most of them the county can’t find,” he added.