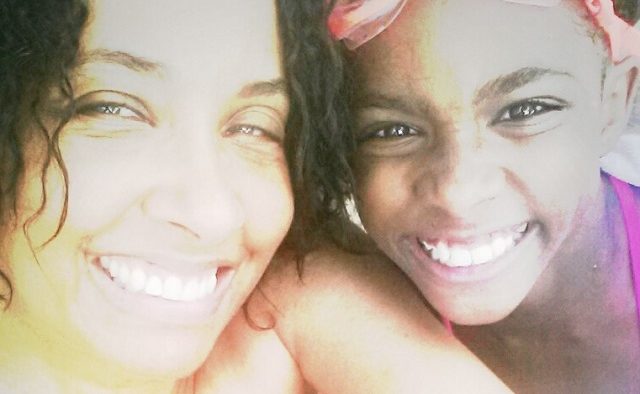 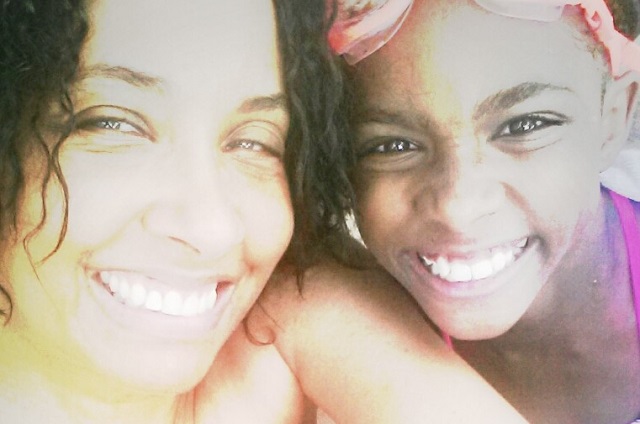 Harriett Grayson and her daughter Caris. Photo provided to Decaturish

Harriett Grayson, a single mother, living in Oakhurst, has seen more than her fair share of health problems.

Being diagnosed with systemic lupus, an autoimmune disease was a tough start. Finding out she would need a new heart changed her life.

Shortly after giving birth to her daughter Caris in 2007, the Decatur mother felt a strange tingling in her face and called her doctor.

During a battery of tests, she looked at one of the health care workers and asked, “is everything going to be okay?”

“And she hugged me and didn’t say anything. And I thought, ‘uh oh,’” Grayson said.

She was diagnosed with cardiomyopathy – a condition affecting the heart that can be caused by a variety of issues.

Because Grayson’s sister had had the same diagnosis years before, doctors thought the cause was genetic.

Despite the diagnosis, Grayson continued to work for the DeKalb County District Attorney’s Office.

“I wanted to give my daughter a good example of a strong woman,” Grayson said.

“It felt like I was going to deliver an alien out of my chest,” Grayson described. She said she started vomiting and made it home just as her mother arrived.

“We were going to a fundraiser for someone who needed a heart and kidney,” Grayson said.

But Grayson’s own health condition was dire. A hospital visit revealed a blood clot had caused a heart attack.

Doctors have told her she would need a new heart soon. This January, she will begin the daunting process of trying to get onto a donor waiting list. It includes medical tests and evaluations and interviews.

“You’re almost in a position where it feels like they’re making you feel are you worthy of this organ?” Grayson said.

After her heart attack, Grayson had to stop working for the DeKalb County District Attorney’s office. But she said they’ve graciously kept her job available and are working with her to try to keep her insurance while on medical leave. Having insurance is a matter of life and death for Grayson.

She said it’s a scary position to be in. “To know that otherwise you’d be sent to hospice to die you can’t get any more black and white than that.”

Grayson’s health battle has changed her life. She says the kindness of her neighbors has also changed her.

Suzanne Elbon lives on the same street as Grayson, but didn’t know her very well. She found out about Grayson’s fight for survival from another neighbor who goes to school with Grayson’s daughter, Caris.

“We talked, and we said, we’ve got to raise some money,” Elbon said.

They created a GoFundMe account called Harriett’s Village to help Grayson with her medical expenses.

But it’s gone beyond raising money. Elbon said the neighbors have set up a calendar to take Grayson meals, walk her dog Artie, and take Caris to school and to her extracurricular activities.

“When I found out, how much they were going to help me, I cried,” Grayson said. “And even thinking about it now makes me cry, because I’m so thankful. I feel like they are all answers to prayers, because I didn’t know what I was going to do. And then here they are – a whole street of angels.”

Grayson describes it as an “Oprah” moment on her street.

“They are just wonderful people,” she said. “Some of these people they know me, some have never had the chance to meet me. They’re the most beautiful souls, and it gives you so much hope to know you’re not alone.”

Grayson said this Christmas will be a “wonderful” one. She’ll be joined by her mother and her sister, who has gone through the same health ordeal and is doing well after her own heart transplant years earlier.

Grayson’s neighbors are answering Caris’ gift list to Santa, and she’ll get everything she wanted for Christmas.

“Anytime your baby is happy, you are happy,” said Grayson.

Elbon said the neighborhood where they live is a unique one because it is so tight knit. She said it was important to her to help Grayson, because Elbon herself was in a bad car accident and had to take extended time off of work to heal. Of helping Grayson, she said, “it’s a chance to complete the circle.”

“They’re beautiful people,” Grayson said of her neighbors. “I told them I will never forget this. When I get old, which I hope I have the chance to do, I will always remember this.”