Reports of damage as storms roll through DeKalb County, flood watch in effect

Reports of damage as storms roll through DeKalb County, flood watch in effect 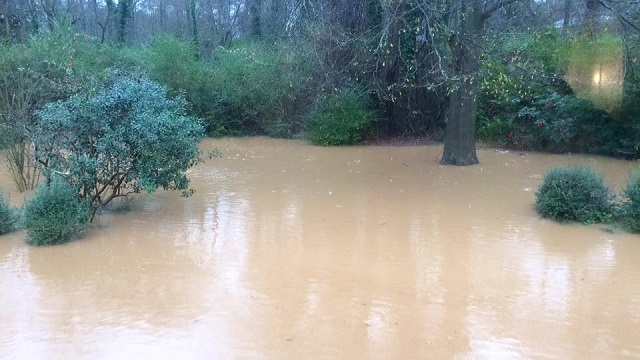 The county is still under a flood watch as storms move through the area on this dreary Christmas Eve.

DeKalb County officials say there have been reports of six trees falling on houses, a report of one tree falling on a car and one house struck by lightning.

“Several roads are impacted by flooding,” a press release from the county says. “As of noon today, Briarlake at Echo Lake is closed due to flooding and Memorial Drive at George Luther Rd is reduced to one lane due to flooding.”

DeKalb Emergency Management Agency Director Sue Loeffler says heavy rain is likely to continue for the next several days. She said drivers should avoid pockets of water in the roads.

“The most dangerous condition for drivers is standing water on roadways. We always say, ‘turn around, don’t drown,’ when flooding conditions are present,” Loeffler said in the press release.

The city of Decatur is advising residents to stay indoors until the weather passes.

“The city of Decatur, like other places in the metro Atlanta area, is under a flash flood warning until 2 p.m. today and a flash flood watch continues until 7 p.m. on Dec. 25,” the city wrote on its Decatur Minute blog. “There is a lot of water on the roads, so if possible, please stay indoors until the storm passes and the water recedes.”

“Due to the extreme weather conditions and flooding, MARTA continues to experience delays on all rail lines,” the Transit Authority said in a press release. “Rail service between the Five Points and Oakland City stations has been terminated and a bus bridge has been established. This will remain in effect until it is safe to resume rail service. MARTA personnel are diligently working to restore full rail service and remain committed to providing a safe, reliable commute for the public.  Customers should also expect delays in bus service due to the torrential rain and street flooding.”