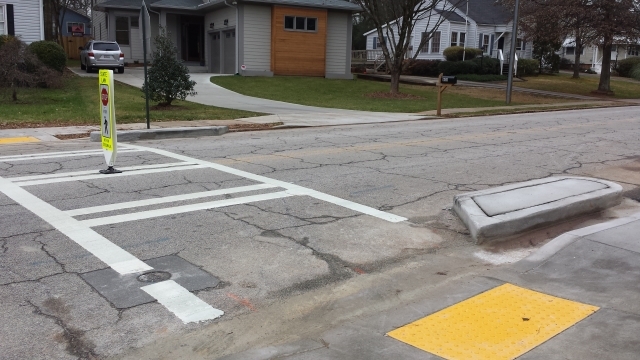 The newly-installed bulb-outs on Sycamore Drive in Decatur. Some residents say they are hard to see and are causing damage to car tires. Photo by Dena Mellick
Share

The newly-installed bulb-outs on Sycamore Drive in Decatur. Some residents say they are hard to see and are causing damage to car tires. Reflectors have been recently been added. Photo by Dena Mellick

A traffic-calming measure on Sycamore Drive is upsetting some Decatur Heights residents.

At least two drivers have hit the curb extensions, known as bulb-outs, recently installed at the Sycamore Station townhomes, according to Assistant City Manager of Public Works David Junger.

One of the unlucky drivers is Frank Goldman, who recently brought his concerns to the attention of neighbors in Decatur Heights. Goldman gave Decaturish permission to reprint portions of his email to the neighborhood’s ListServ. He says the bulb-outs are a safety hazard because they’re hard to see.

“They sit about 3 feet into the road on each side,” Goldman wrote. “They have no reflective paint and are difficult to see. Since there now is a crosswalk sign in the middle of the street adjacent to [them], a driver’s attention is focused mostly on that sign. Suddenly however, drivers have to weave to avoid the sign and then the [bulb-outs] with not more than a foot of clearance. Additionally, if one is making a right turn out of Sycamore Station, the [bulb-out] on the east side of Sycamore Drive is impossible to see and shaped in such a way to destroy tires. Last night, I struck the [bulb-out] making the turn on a rainy night, and it destroyed mine. That cost me $275.00.”

Another resident Christine Koehler, told Decaturish, “These REALLY are dangerous and need to at least have some reflective paint on them.”

Reflectors had been added as of Jan. 27, but Koehler said despite that another resident’s mother hit the bulb-out on the evening of Jan. 26.

“Yeah we had a quite a few to begin with and it seems to have settled out,” Junger said. “Again it’s a sizable change. We got some critiques.”

Junger said the bulb-out “does squeeze the road” in an attempt to get cars to slow down on a problematic stretch of the road between stop signs.

He said contractors are finishing striping and adding reflectors there. He said it already was in the works, but it was delayed by recent weather.