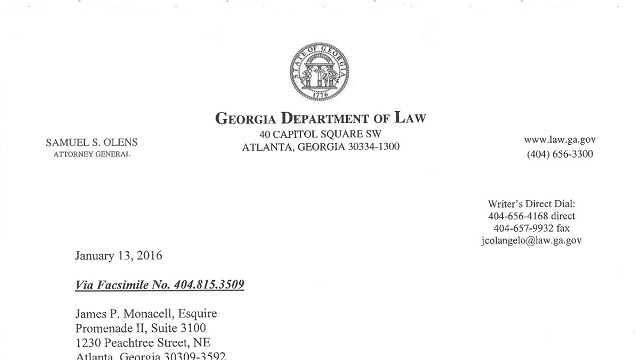 The state Attorney General’s Office has received a complaint regarding a recent meeting held by the Avondale Estates Downtown Development Authority.

The AG has sent a letter to the DDA’s attorney seeking a response to the charges that the DDA held a closed-door meeting to discuss vacancies on the board. There’s a question about whether that closed-door meeting is legal under the state’s Open Meetings Act.

The board, which is responsible for promoting development in the city’s downtown business district, has been working to fill vacancies on the board. The complaint, filed by resident David Mattingly, said the board held a closed door meeting, known as an executive session, on Jan. 7, to discuss and interview applicants for the vacancies.

In his complaint, Mattingly writes that, “Acting on the instructions of Avondale Estates City Manager Clai Brown, members of the independent Avondale Estates Downtown Development Authority (DDA) disregarded public questions Wednesday night (Jan. 7, 2016) about the legality of their actions and met in executive session to discuss openings on their board, as well as interview applicants for those public positions. This has happened twice in the last three months, a previous executive session was called for the same purpose on October 27, 2015. This is in apparent violation of the Open Meetings Act.

The OMA states that, “Meetings by an agency to discuss or take action on the filling of a vacancy in the membership of the agency itself shall at all times be open to the public.”

“Public concerns were expressed to members of the DDA verbally and in email on this point but the arguments were dismissed,” the complaints says. ” …. What is perplexing is why the DDA would ever go into executive session for personnel reasons to discuss appointments to its Authority? The DDA cannot add or remove any members from its own board. In fact, only the Board of Mayor and Commissioners for the City of Avondale Estates can appoint members to the Authority.”

The letter from Assistant Attorney General Jennifer Colangelo does not assert that any violations occurred, and only seeks additional information from the city in response to the complaint.

Decaturish attempted to contact the DDA about the complaint, and received a response from Brown, the city manager.

The DDA’s attorney is James Monacell, according to the letter from the AG’s office.