Dear Decaturish – Is the death penalty worth it?

Dear Decaturish – Is the death penalty worth it? 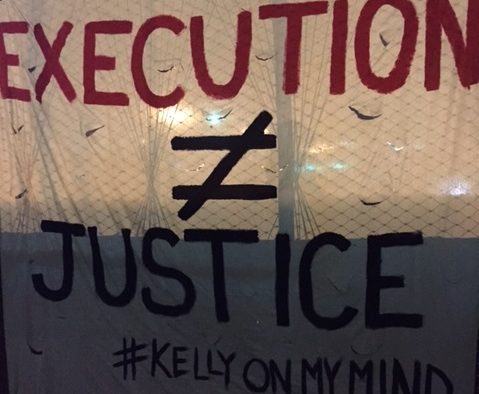 “Let there be peace on earth.” In December, this phrase rings in the aisles of grocery stores and the shoe section of the mall. So many times, though, it’s hard for us to see this phrase gain any traction. Violence and hateful rhetoric seem to take over in the news and on our newsfeeds. This makes us feel uneasy, not peaceful. I certainly experienced similar unrest this year in my advocacy work for Kelly Gissendaner, a previous inmate on death row. Kelly was convicted of conspiring her husband’s murder in the early 1990s, but she was not actually present at the time of the murder. While Kelly admitted her guilt for her involvement in the murder, the man who actually committed the murder received life in prison and is up for parole in less than a decade. Meanwhile, Kelly received the death penalty. She was the first woman to be executed in Georgia in 70 years.

As a third year graduate student at Candler School of Theology at Emory, my connection to Kelly was through her participation in the theology certificate program offered at Arrendale State Prison. While I wasn’t personally involved in the program, I had many friends who were, which is how I became familiar with her case. From a theological perspective, it was impossible for me to not want to fight for Kelly’s life. My beliefs in the power of redemption and grace for anyone and everyone prevent me from believing that revenge is ever constructive. While I understand the pain and anger that victims feel and fully acknowledge the validity of those emotions, I don’t believe that further killing helps heal this pain. If anything, it causes more pain.

For months I and a team of other theologians and activists worked to save Kelly’s life. There was hope for clemency, partially because of the lack of proportionality in her sentencing and also because of Kelly’s marked change from the time of the murder until now. If the goal of our criminal justice system is reform, it seemed that Kelly had, indeed, been reformed. She served as a counselor figure for troubled women in the prison around her, whom she counseled by talking to them through air vents. She expressed great remorse and regret for her crimes but also moved toward personal healing. The Board of Pardons and Paroles, however, was relentless in their insistence on executing Kelly, even going as far as to require Kelly’s children to choose between spending a last afternoon with their mother or testifying at her clemency hearing. Despite all of this, Kelly was not granted clemency and was executed during the first hour of Oct. 1, 2015. Instead of going into detail about what it feels like to be at an execution, I encourage you to read my blog post about it here: http://bit.ly/1IYYE2e

Instead, I want to spend my limited amount of words telling you more about why this should matter to you. The state of Georgia executed five people in 2015, one of the top three states in the country below Texas and Missouri. Even more disturbing is that 2016 is expected to involve even more death, with the Board of Pardons and Paroles planning to schedule two executions per month until no one remains on death row. Why does this matter? Why should it matter to you? Hopefully it matters because human life has value. For me, human life has value because it is a gift from God, but even if you don’t cling to any particular religion I would hope that life would have a similar value to you. By taking away someone else’s ability to live, our state is only implementing more pain. Justice and mercy must be maintained in a balance, and that balance is clearly off in the state of Georgia. Second, executions are more costly than keeping people in prison for life sentences. While I would hope we might manage to care about others for reasons other than finances, it is important to note both the financial and emotional cost of execution. Third, the death penalty has not proven to be a good deterrent for crime. Since the reimplementation of the death penalty in 1976, gun violence and murder continue. Why, then, should we continue to also take life in return?

Maybe you still disagree. I hope that you don’t. I hope that the consistent executions of those who claim innocence, those (like Kelly) who did not commit murder, and those who have mental disabilities makes you question the concept of justice. I hope that the pain I felt on October 1st and continue to feel over the loss of Kelly makes you consider whether the death penalty is worth it. Because only when we cease seeking revenge out of fear and anger and, in turn, try to learn each other’s stories out of love can there be peace on earth.

Further resources for information and activism: