The city of Decatur, along with City Schools of Decatur and the Georgia Department of Transportation (GDOT) are holding The Big Walk on Wednesday morning, from 7 a.m. until 9 a.m. along South Candler Street.

The walk is a way “to show that there is demand for more safe crossing options in this area,” according to a city email. It goes on to say, “Folks of all ages are encouraged to get active on your way to school, work, or even just a morning stroll. Walkers, cyclists, skaters, and even dogs can join in the fun.”

An email from Winnona Park Elementary School last week said GDOT will be conducting a pedestrian count. The school moved its Walk and Roll Day to coincide with The Big Walk.

Last year, several citizens came together to gather signatures for the Calm Candler Petition. The group asked the city to lower the enforceable speed limit to designate South Candler as a residential street in addition to lowering the posted speed limit and improving pedestrian crossings.

One of the organizers, Tonio Andrade said of Wednesday’s walk, “If the event goes well, we may achieve something that is, so far as anyone knows, unprecedented in Georgia: the designation of a state route as a ‘residential street,’ meaning that the enforceable speed limit would be the posted speed limit, instead of 10 miles above.”

The city said, “Participants are asked to cross South Candler Street at East Dougherty Street, Kirk Road, or East Pharr Road. Feel unsafe? No worries, Decatur Police and city staff will be on hand to keep things running smoothly. GDOT officials will be on hand to conduct pedestrian counts.”

Here is a map of the route: 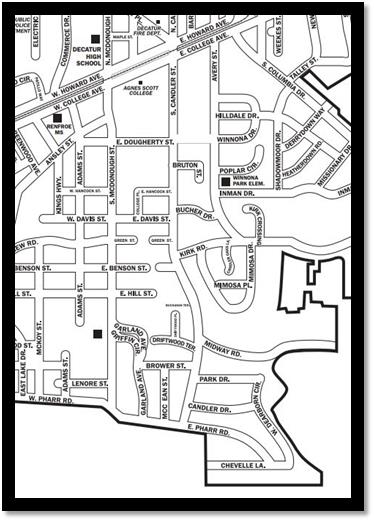 Route of The Big Walk on South Candler Street.