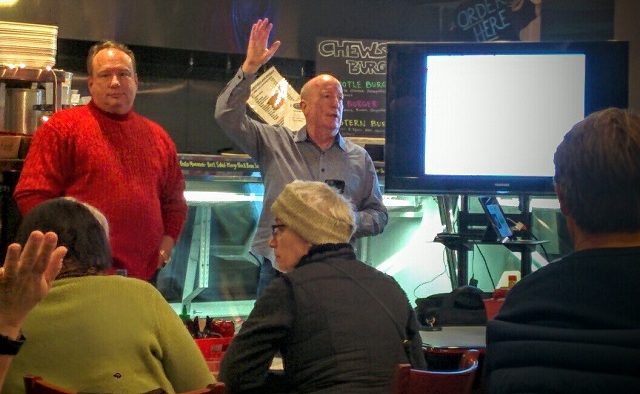 John Ellingson, left, and Ed Rieker, right, give a presentation at The Market in Avondale Estates on Jan. 5. Photo by Dan Whisenhunt
Share 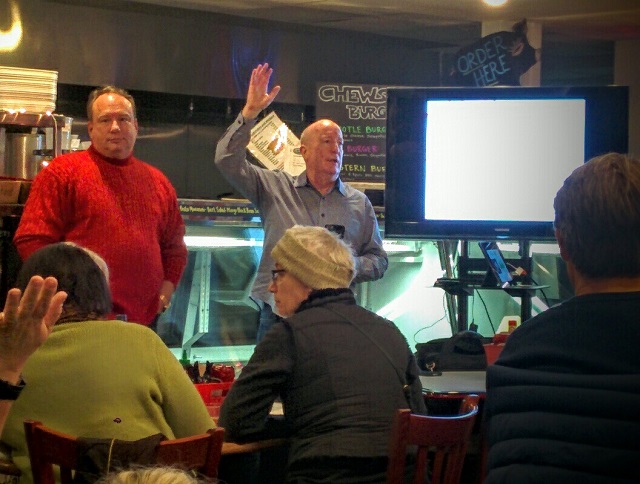 John Ellingson, left, and Ed Rieker, right, give a presentation at The Market in Avondale Estates on Jan. 5. Photo by Dan Whisenhunt

Former Avondale Estates mayor Ed Rieker has announced he is no longer seeking to put soccer fields on a site slated for a private development.

In related news, the city’s current Mayor Jonathan Elmore said developer Euramex may be close to making its first official presentation to the public regarding its plans for the Fenner Dunlop site.

As first reported by Decaturish, Rieker, who resigned in 2014 to take a university teaching job, held a meeting in Avondale Estates on Jan. 5 to discuss his idea. He proposed placing four soccer fields, two indoors and two outdoors, on the property owned by Euramex. The proposed arrangement was described as temporary and Rieker would’ve been Euramex’s tenant. Rieker predicted that any development on the site might be several years away. In addition to the Euramex site, Rieker was looking at two additional sites that he did not identify.

Euramex had not been receptive to the idea, Rieker said. The former mayor has business interests in downtown Avondale, including the Tudor Square building. On Jan. 15, Rieker posted a message on the Tudor Square Facebook page saying that the impending presentation by Euramex meant his project was no longer needed.

“Good news! It appears that the Mayor and commissioners are in very active talks with Euramex on their development of a grocery store and apartments for the mill property in downtown Avondale Estates,” he wrote. “The soccer complex at the mill was envisioned as an option to provide an attractive, active destination to foster a vibrant, walkable downtown AE. With the pending new residential housing and retail it is no longer needed in AE.”

Rieker did not return a message from Decaturish seeking comment.

Elmore told Decaturish on Tuesday, Jan. 19, that he was hopeful Euramex would bring something before the public in February. There’s been no official renderings, but the Euramex is planning 200 apartments and 80 town homes, .6 acres of green space and two 10,000 square foot retail spaces along North Avondale Road.

“As far as we know they have every intention of showing up here soon and presenting to the public which is what we’ve been pushing them for,” Elmore said.

He said he wasn’t opposed to Rieker’s plan, but said it raised many questions that needed to be answered.

“There were so many factors, so many hurdles to overcome, that it had a ways to go no matter what,” Elmore said.

He said Euramex’s public presentation will be an important first step toward development of the Fenner Dunlop site.

“It’s not going to move forward in a meaningful way until they present it in front of the public,” Elmore said. “We want to hear people’s feedback.”