Supporters of creating a new city of LaVista Hills haven’t given up on the idea of cityhood, and are now openly considering annexation into the existing city of Chamblee.

LaVista Hills was defeated in a Nov. 3 referendum by 139 votes.

A group called Citizens for Cityhood, which is targeting voters in the precincts that supported LaVista Hills, suggests Chamblee as an alternative to remaining in unincorporated DeKalb County. An email written by Citizens for Cityhood member Ben Shackleford says, “Annexation into an existing city in DeKalb County is potentially a solution for local control, better services and more responsive government.”

The email rejects the idea of annexing into the city of Brookhaven, a newer DeKalb County city, or the city of Tucker which was overwhelmingly approved on Nov.  3.

The email says, “Annexation into Tucker seems possible for areas in close proximity to commercial property, however, the new city of Tucker will initially offer only three public services (Parks, Planning and Permitting). Annexation into Brookhaven is unlikely because there is little geographic overlap with the areas that favored cityhood in the 2015 LaVista Hills election.”

“Restoring ethical, effective governance appears to be a long way off. In addition, staying unincorporated will likely mean commercial areas will become absorbed into the adjoining cities of Tucker, Chamblee and Brookhaven, leaving the residential areas behind,” the email says.

According to the Brookhaven Post, Chamblee officials are receptive to the idea.

The group says the benefits of annexing into Chamblee include better representation by elected officials (one council representative for every 10,000 residents), a dedicated police department, and other public services like sanitation and public works.

Here is a map of all the areas that voted for and against LaVista Hills, listed by precinct. 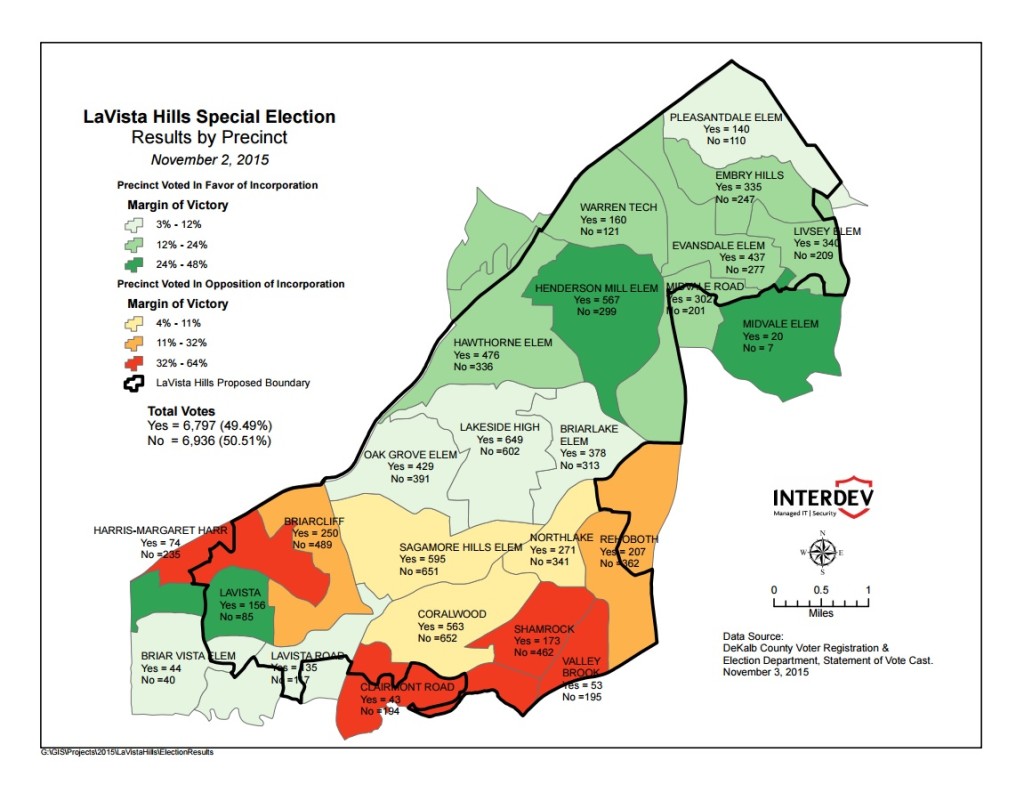 An Election Results Map prepared for LaVista Hills Yes! at the request of Herman Lorenz by the consulting firm, InterDev.