Bhojanic Decatur closed its doors in Nov. 2015. Photo from www.facebook.com/Bhojanic-Decatur-84253373755/timeline

The latest food news in and around Decatur…

Months after Bhojanic Decatur closed, there’s word that a Bhojanic Market has moved into Emory University’s Cox Hall. The AJC reports Bhojanic Market “offers Bhojanic favorites on a hot line including rice bowls and platters with chicken tikka masala and chole, samosas and fresh tandoori naan, prepared hot and cold take-away meals, spice blends, chutneys, and tiffin service.” The owner said additional market locations are in the works, according to the report. 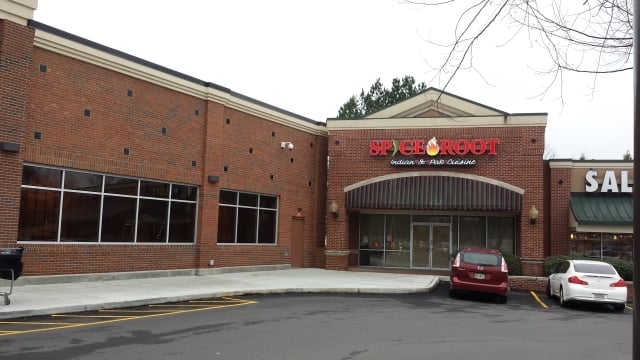 Spice Root, an Indian and Pak cuisine restaurant, is opening next to Kroger. Photo by Dena Mellick

It appears a new Indian and Pak cuisine restaurant called Spice Root is moving in next to the newly-renovated Kroger on DeKalb Industrial Way. No word on when the restaurant will open.

Decatur’s Makan Restaurant & Bar will hold a Lunar New Year party to celebrate the Year of the Monkey. The party takes places on Saturday, Feb. 6 from 12 p.m. until 4 p.m. Tickets for adults are $20 and are free for children. A portion of proceeds will go to charity. There will be a traditional lion dance by the Chien Hong Kung Fu School. Tickets can be purchased here.