Highland Bakery, Taziki’s Mediterranean Cafe, and Orangetheory Fitness have signed leases for The Place on Ponce. Photo by Dena Mellick

Taziki’s Mediterranean Cafe will open on Tuesday, Jan. 12. A spokeswoman for the restaurant said a ribbon-cutting will take place at Taziki’s at 10 a.m. It offered a preview of its food to Decatur police and firefighters on New Year’s Eve. The restaurant chain posted a video of the officers enjoying the food on its Facebook page. The restaurant on West Ponce initially planned to open in November, but was delayed. Taziki’s will eventually be joined by Highland Bakery in the 315 West Ponce building. 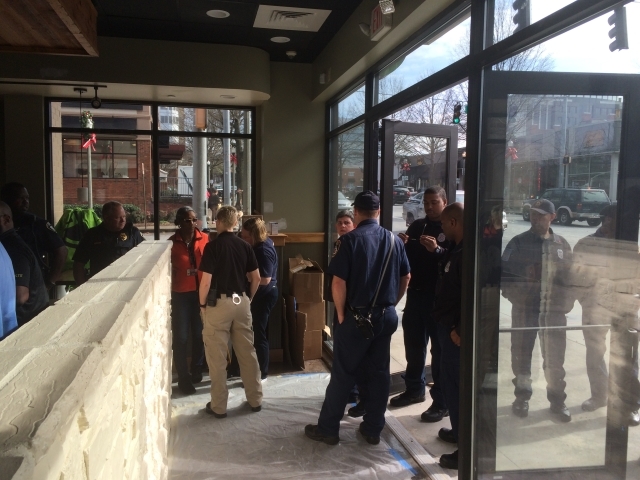 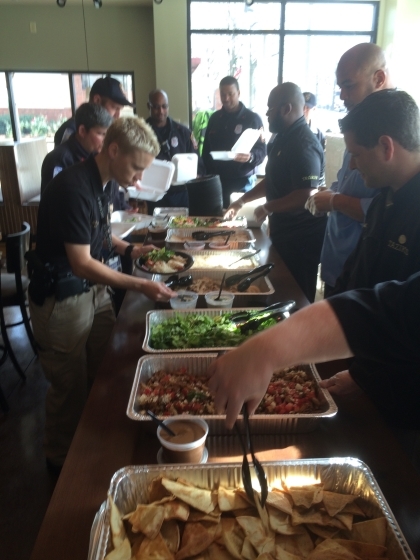 Decatur firefighters and police got an early taste of Taziki’s food on New Year’s Eve. The restaurant will open in January 2016. Photo provided by Taziki’s

The highly-anticipated Brush Sushi Izakaya has also delayed its opening. Initial plans were to open this month, but executive chef and owner Jason Liang tells Decaturish he is looking at a mid-February opening now.

Eat like Souper Jenny. Souper Jenny Decatur owner Jenny Levison is sharing her clean-eating recipes in the new year. On her blog, Following Jenny, she posts, “I decided that with the new year I would commit to sharing what I cook for dinner at least once a week. I can’t guarantee that every recipe will be a home run since I like to experiment and make up my own recipes, but I can promise they will be easy, take less than 30 minutes and will be filled with good ingredients that your body needs.” The series of recipes will be called “What I Had for Dinner.”

The Comet Pub and Lanes shared more photos of the ongoing work on the bowling alley on its Facebook page, saying “Good momentum entering 2016! Keep checking back for updates!” The owners of Twain’s purchased the former Suburban Lanes and have been renovating the space in Suburban Plaza to include a full kitchen and bar.

Dec. 2015 renovation at The Comet Pub and Lanes. Photo from https://www.facebook.com/thecometpubandlanes/