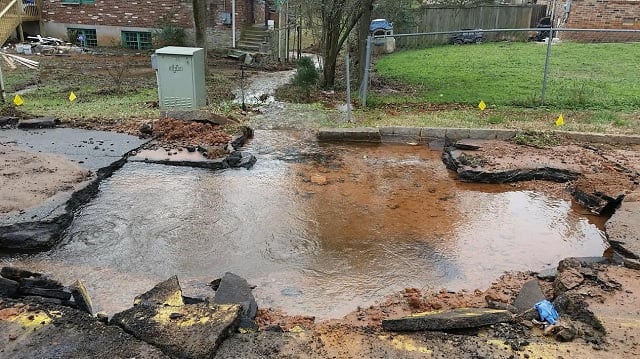 The water main break is near the Scottdale Food Mart on McLendon Drive. Photo by Burke Brennan, spokesperson for DeKalb County
Share

The water main break is near the Scottdale Food Mart on McLendon Drive. Photo by Burke Brennan, spokesperson for DeKalb County

A 42-inch water main break will close McLendon Drive for the next few days and it could create water pressure issues for Decatur and DeKalb County residents.

According to the city of Decatur, the break – which is outside city limits – occurred between  between Tanner Drive and Brook Drive.

“DeKalb has turned the water pressure down in order to make repairs,” the city wrote on its Decatur Minute blog. “Currently the break is not affecting City of Decatur residents, but if it becomes necessary to turn the water off to make repairs, city residents on the east side of Decatur may be affected.”

According to a notice from the county, “Both lanes on McLendon Drive will only be accessible for local traffic for several days. While there are some areas of low water pressure, there is no interruption of water service for area residents at this time.”

Both sides of McLendon are closed to traffic. The closure will last at least through Monday, county spokesperson Burke Brennan said. He said the water main break, which occurred near the Scottdale Food Mart, was due to the age of the line.

“Most of the time when there’s no obvious cause, it’s usually age,” Brennan said.

“This is starkly different than that one,” Brennan said. “This one is a lot further down the line and it’s flanked by other transmission lines. The water is shut off right now. Zero people are without water, although there are some people that might be experiencing a little bit of a pressure shift, because we’ve got a 24-inch main to our west. We’ve got a 30 inch main to our east, and that’s servicing all of the neighborhoods and everything around here.”