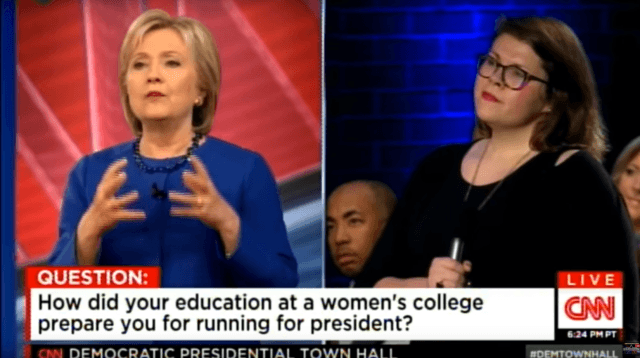 Sally Horne, a 2013 graduate of the college in Decatur, asked Clinton about attending a women’s college and how it helped prepare her for a run for the presidency.

Horne, a student and part-time law clerk, mentioned Agnes Scott and Decatur in her question.

Horne said, “I had the privilege and delight of attending Agnes Scott College in Decatur, GA, a women’s college – we share that. I was wondering if you could elaborate on how attending a women’s college prepared you for the specific challenge of running for president, especially when it’s often challenging when people don’t recognize women’s issues as significant or women themselves as significant.”

Clinton complimented Horne on her question and noted that she had visited Agnes Scott College and attended a women’s college herself – Wellesley College in Massachusetts. She said attending a women’s college was a great leadership opportunity. Hear what else she told Horne in her response. Horne’s question begins around 45:10 in the video.