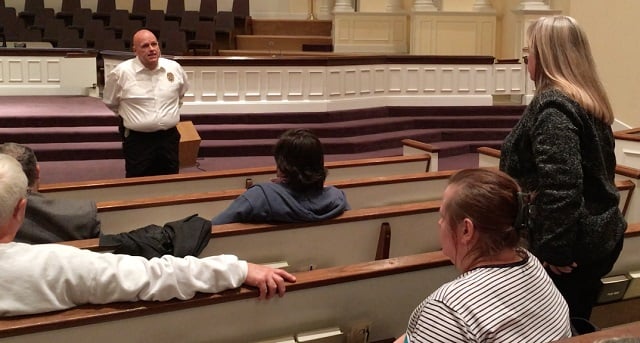 Cpl. Paul Conroy answers questions from the audience after giving a presentation on active shooter preparedness. Photo by David Schick

You’re at work, school, or even your place of worship, and an active shooter arrives on the scene—what do you do?

That was the question being discussed during the “active shooter preparedness” training at First Baptist Church of Avondale Estates on Thursday evening.

“In short we’re trying to deliver a message on a local level that is really born from a national need,” Conroy said.

That message is contained within a new active shooter mantra: Run. Hide. Fight.

“If I can’t run, can I hide?” he said. “ If I can’t run or hide, can I fight? Or can I really put myself out of the equation as quickly as I can, and what is the best means to do that?”

Conroy recently attended a Federal Law Enforcement Training Center session in Charleston that specifically addressed this topic. He, along with other law enforcement personnel, is hoping that mantra will begin to stick inside peoples’ brain like the motto for what to do when you’re on fire (stop, drop, and roll).

“What we’re hoping to deliver is a sense of consistency in the message that we’re delivering, and a sense that people can take some steps to help themselves until we arrive,” he said.

Conroy said he hopes the community will take the “run, hide, fight” message and discuss it with everyone. In today’s world, he said he sees it as another string to add to your bow.

“The end result is—[the police] are going to arrive,” he said. “We are trying to really give [the public] some information that gives them a better decision making outlook.”

Sarah Miller, an Avondale Estates resident who is part of a citizens’ patrol and a parishioner of the church, said she was grateful for the police department’s training.

“I thought it was an excellent presentation,” she said. “I learned so much from what Cpl. Conroy had to say. I feel like in the event that I am caught up in something like this I think I have a little bit better chance of getting out alive.”

A question and answer period followed the presentation—which also included a short video that portrayed several potential active shooter scenarios, complete with ominous tones to make you feel like you were watching the real-life Law & Order.

Some of the questions and comments from the public were related to concealed carry because, Georgia.

Conroy said it’s best if you’re not armed in a live shooter situation. The police, he said, are “morphing into this solo officer entry,” which means, ”the first officer who arrives on the scene will go into the building.”

That first officer will have to consider everyone a suspect until contact with the shooter is made. His mission, Conroy said, would be to “stop the violence by any means necessary.”

Additionally, the Atlanta Police Department recently hosted a separate active shooter presentation this week, and plans to hold two more around the metro area in March.

To RSVP, send an email to: [email protected]