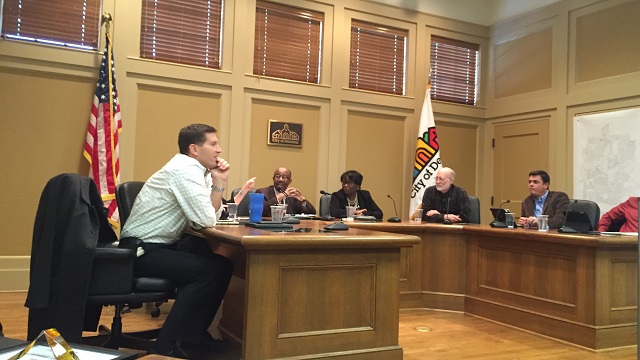 Caption: Decatur City Commissioners and GDOT board members listen to a presentation from city staff on ways to improve street safety and walkability. Photo by Mariann Martin
Share

Caption: Decatur City Commissioners and GDOT board members listen to a presentation from city staff on ways to improve street safety and walkability. Photo by Mariann Martin

Decatur city officials would like to change the method they use to determine speed limits, as a way to make city streets safer for pedestrians and bikers.

In a presentation to Georgia Department of Transportation board members and city commissioners on Friday afternoon, city officials said they would be willing to test a pilot program to better evaluate ways to lower speed limits and make dense urban streets safer. City commissioners and staff members did not take public questions or comments during the hour-long work session.

“Our speed limits make no sense,” David Junger, Decatur Assistant City Manager told the group. “Right now we are looking at all the speed limits to create consistency. We are trying to built a healthy community here.”

The city of Decatur has long focused on creating a walkable community, with sidewalks and bike lanes throughout the city. During city elections last year, making city streets safer and more pedestrian friendly was a frequent topic at candidate forums. The city has the challenging combination of having several residential streets that are also main routes to downtown Atlanta. Staff members said in the last few years, they have seen a large increase in requests, suggestions, and complaints from city residents about various street and safety issues.

Under GDOT requirements, speed limits are determined by looking at the speed of about 85 percent of routine traffic on a street. It would take decades to evaluate all the Decatur streets using that method, Junger said. In addition, using that calculation does not mean the determined speed is the safest for pedestrians and bikers, he said.

Mayor Pro Tem Fred Boykin seconded the request to be allowed to look at different ways to address street safety.

“The needs and focus of the community have changed and we need to think outside the box,” he said.

During their presentation, Junger and other staff also discussed changes they are working on to make Decatur more pedestrian and bike friendly. They have recently gotten approval to reduce the speed limit on Sycamore Drive, Lockwood Terrace and Ridgeland Avenue to 25 miles per hour. The city commissioners will need to approve the change in their next meeting before the posting is changed, Junger said.

GDOT and the city recently conducted a study on South Candler Street to assess the need for a pedestrian crosswalk near Davis Street and Bucher Drive. State engineer Kathy Zahul said the area has enough pedestrian traffic to put a pedestrian crossing called a rectangular rapid flash beacon. It may even have a high enough volume to install a pedestrian hybrid beacon, which is a red flashing light across the road. Zahul said she did not know how soon the crossing would be installed.

The group also discussed Scott Boulevard and how to best address the traffic safety there. A current petition on Change.org to make changes to that street has more than 1,000 signatures, city officials noted.