In 2016, the School Board gave Superintendent David Dude money to buy a home. Here's a file photo of the people serving on the School Board at the time the payment was approved. City Schools of Decatur Board of Education: (left to right) Tasha White, Vice Chair Garrett Goebel, Lewis Jones, Chair Annie Caiola, Superintendent Dr. David Dude, and Bernadette Seals. Source: City Schools of Decatur
Share

Last month the city of Decatur called and then quickly cancelled a City Commission meeting to vote on issuing $75 million in school construction.

The meeting was cancelled at the request of Superintendent David Dude. The new superintendent realized that by setting the minimum bond bid at $75 million, the school system might receive a bid that was higher than that amount.

That, he said, was not what voters approved on Nov. 3.

“The reason that I pulled the bid is I’m worried about what was advertised to the community and what the community understands,” Dude told School Board members during a Jan. 27 special called meeting. 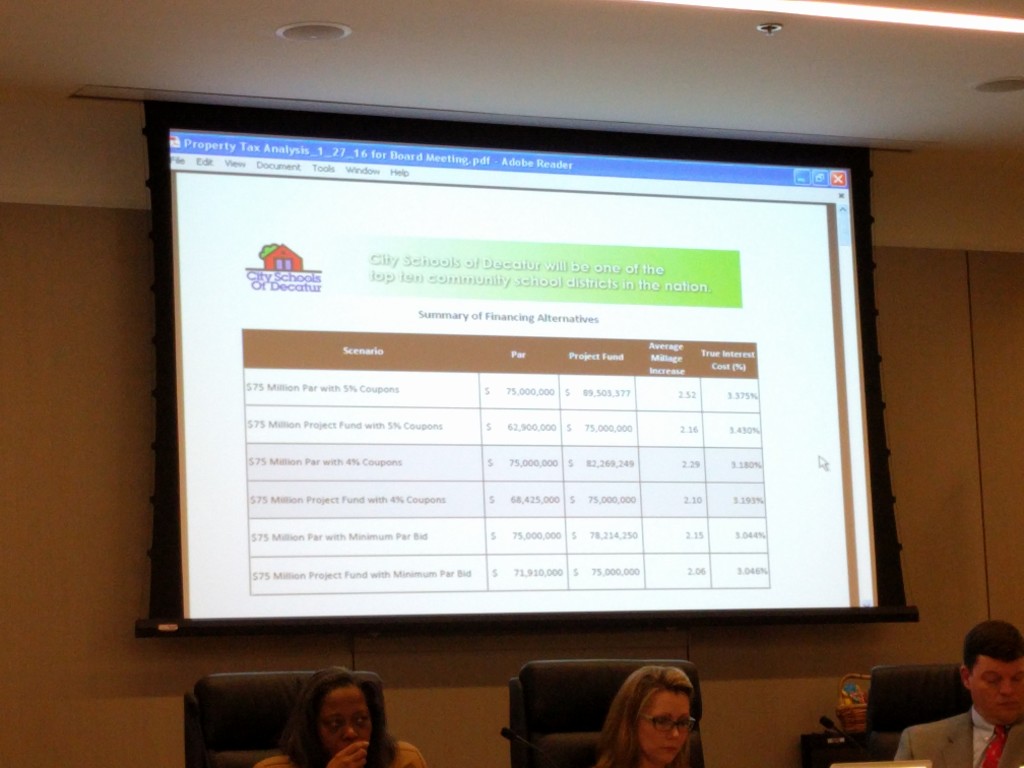 Here are the figures presented at Jan. 27, 2016 meeting. Click to enlarge.

“Dr. Dude was very wise in his decision that we needed to go back and have the board look at it one more time,” McNabb said.

The School Board agreed, and said they did not want to receive more money than what voters approved in November.

“It would be disingenuous to what we had telegraphed to the community,” board member Garrett Goebel said.

The Decatur City Commission meeting to vote on issuing the bonds was rescheduled for today, Feb. 11, at 5 p.m. at City Hall, located at 509 North McDonough Street. All meetings are open to the public.