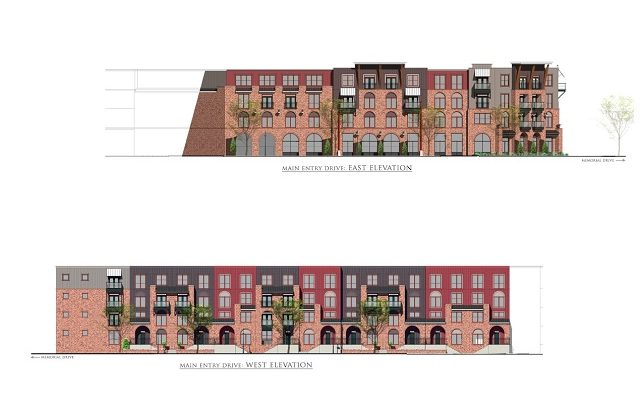 The developer who wants to build a 340-unit apartment complex in the Kirkwood and Edgewood communities promised to go back to the drawing board after residents expressed concerns about the plans.

Kelly Keappler, president of development at Quintus Corporation, met with dozens of Kirkwood and Edgewood residents Tuesday evening at Kirkyard Public House. After Keappler presented his plans and showed drawings for the site, residents raised concerns about the central six-story parking deck, lack of integration with the community, additional traffic, the cost of the proposed units and absence of commercial space in the development.

“I think it sucks,” said Eric Kronberg, with Organized Neighbors of Edgewood, while discussing the large parking deck that would be visible from Memorial Drive and the large number of planned parking spaces. Other residents seconded the concerns and offered numerous suggestions for changes to the plans.

Quintus Corporation has filed a rezoning application for the 11.1-acre property along Memorial Drive, Vaughn Street, and Woodbine Avenue. Currently, the property has several apartment units, as well as some abandoned property, Keappler said. Sugar Creek runs through the property, which also contains a large green space.

Keappler proposed plans Tuesday evening for a 340 units ranging in size from 700 to 1,100 square feet. Most of those would be one bedroom, he noted. The complex would be five stories tall along Memorial Drive, but would drop to two-story units along Vaughn Street. Keappler described the overall look for the complex as a mix of traditional and a “factory mill look.” The proposed cost of the units would be in the $1,100 range, he said.

Several residents asked if a traffic study had been done and whether the streets would be able to handle the additional traffic.

A traffic study for Memorial Drive is in the works, according to Greg Giuffrida, Memorial Drive Corridor Executive, who also attended the meeting. That study is projected to be finished this summer and will look at all of Memorial Drive, not just the proposed development area.

The Kirkwood and Edgewood communities want to focus on moving towards a walkable, connected community, several residents noted, and building a car-oriented, completely disconnected apartment complex would directly contradict their efforts.

Residents also questioned why Quintus is interested in an urban development. The family-owned company founded in the 1940s has primarily done suburban development in metro areas like Kennesaw and Smyrna.

Keappler said his family wants to be a part of the resurgence in Atlanta, promising that Quintus owns the properties they build and cares about the communities they develop.

The rezoning application requested a hearing in April, with the sale of the property contingent upon the approval of the rezoning, but Keappler said he will push back the hearing in order to address concerns from the residents. He promised to redraw the plans and to not move forward with the development until residents from both communities approved the plans. He gave out his email address to numerous residents and promised to hold additional meetings before any more is done on the development.

“We won’t move on from these grassroots meetings until we have a general consensus,” he said. “We want to be a part of what is happening here.”

More: Here are conceptual drawings of the proposed apartment project.