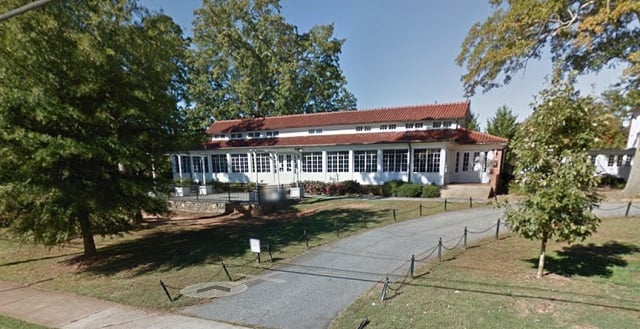 The Solarium at the historic Scottish Rite building in Oakhurst. Photo by: Dan Whisenhunt

Now a new restaurant, Scout, will be taking its place. The restaurant will be owned by Chris Martha and will open sometime this summer.

According to a press release, Martha is a Decatur resident.

“My family and I have lived here since 2008 and we love it,” Martha said in the press release. “A Scout is service oriented, committed to the community and holding of the highest standards. This is the foundation upon which our restaurant will be built.”

“The bar, a quintessential part of all neighborhood eateries, will feature the artisanship of the staff, local brewers and boutique wineries,” the press release says.

The closure of McGowan’s brought to light a lawsuit between the building’s former owners, Progressive Decatur, and the nonprofit that fought to save the historic property, the Community Center of South Decatur. The lawsuit was resolved when the city of Decatur, via its Development Authority, stepped in to buy the property. The city intends to use rental income from the property to pay of the money borrowed to purchase it.

Atlanta (March 17, 2016) –The City of Decatur has become a hotbed for creative casual dining in the Metro Atlanta area, and the scene is only improving with the addition of Chris Martha’s newest restaurant: Scout.  Martha will build on 20 years of experience in Atlanta’s restaurant industry, and he and his team have chosen to partner with the City of Decatur to bring Scout to the Oakhurst neighborhood.

“My family and I have lived here since 2008 and we love it,” said Martha. “A Scout is service oriented, committed to the community and holding of the highest standards.  This is the foundation upon which our restaurant will be built.”

Local firm Seiber Design, Inc. will lead the architectural and interior re-design of the historic 4,500 square foot space at the Scottish Rite building. Ben Lassbeck of LCM International has been selected as the general contractor.

“To collaborate with Chris in designing his restaurant in an historic Neel Reid building was a great opportunity, one requiring respect for the original building while also creating a vibrant new neighborhood spot,” said Ed Seiber.

The restaurant is slated to open in early summer 2016. The name will play an important role in its approach to food and beverage, sourcing local, Southern ingredients as well as redefining classic comfort foods in a social setting.

The bar, a quintessential part of all neighborhood eateries, will feature the artisanship of the staff, local brewers and boutique wineries. “There will be a sincere commitment to fun cocktails, cool seasonal beers and a thoughtful wine list,” commented Martha.

Green Olive Media will lead the branding and graphic design elements, rounding out the neighborly theme. The website, menus and branded items will aim to make guests smile as they recognize details that give them the feeling that they’ve returned home.

“We set out to create a space that would be both social and approachable.  It will be comfortable enough for your kids, refined enough for grandma and fun enough to be a social group destination,” said Martha.

Growing up in Pittsburgh, Chris Martha started working in hospitality at an early age.  He developed a passion for the business at age 14, when, throughout high school, he ascended the ranks from dishwasher, bus boy, line cook and waiter.  He went on to earn a business degree in hotel restaurant management from Penn State University and studied abroad in Switzerland where he fell in love with food and its deeply rooted connection with family and culture.  Throughout his career, he has worked in nearly all facets of the industry from casual to fine dining within both hotels and restaurants.   Most recently, he tapped in to all of this experience to bring The Georgian Terrace to the forefront of Atlanta’s food and beverage scene.

Martha’s career began with an internship with Hyatt Regency Resorts in Hilton Head, SC, that later led to a permanent position in Beaver Creek, CO.  Hyatt proved to be an excellent training ground, but his heart was in smaller, independent eateries.  He moved to Atlanta on the advent of the 1996 Olympic Games and spent seven years with Fifth Group Restaurant favorites South City Kitchen, LaTavola and The Food Studio, eventually becoming director of operations for their catering arm, Bold American Food Company.

He went on to become general manager at Spice for six years.  Soon after, he and partner Scott McCray opened McCray’s West Village Tavern, located in the Symrna/Vinings area of Atlanta. After parting ways with McCray, Martha found his way back to fine dining as general manager of La Pietra Cucina.  His focus and extensive experience in driving operational efficiencies and improved customer satisfaction has made him an asset as food and beverage director where he continued to build on the foundation of the Livingston Restaurant + Bar brand – one that is consistently named one of the top restaurants in the city by critics and diners.

His latest creation came in June of 2012 when the historic hotel asked him to repurpose an abandoned basement space. Martha and his team went to work and created Proof & Provision.  A craft cocktail bar at the core, P&P serves up an array of elixirs and snacks in an approachable yet intimate environment. The bar has garnered a great deal of praise from the likes of Details Magazine and Garden & Gun.