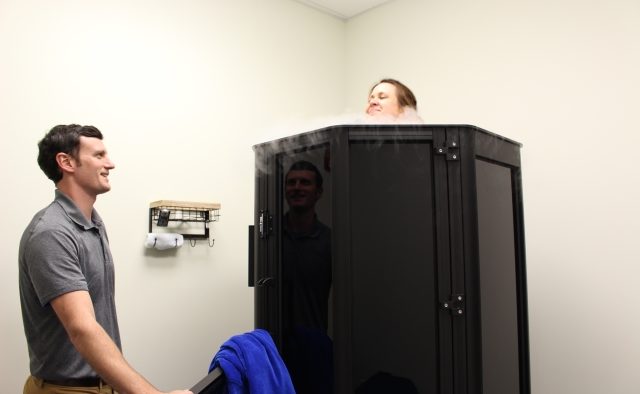 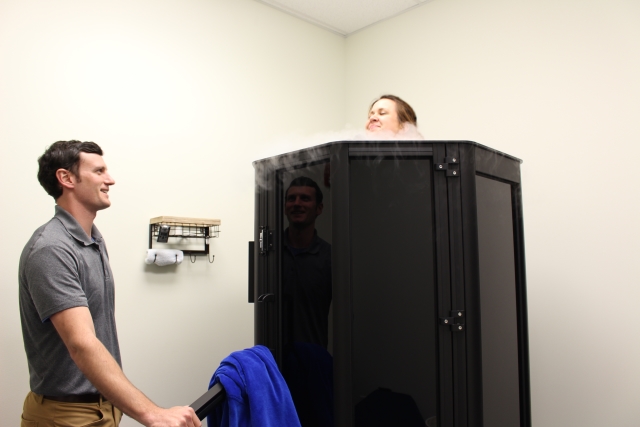 Dr. Danny Matta talks to Athletes’ Potential Office Manager Claire Paskus as she demonstrates the cryotherapy machine which gets down to -202 degrees Fahrenheit. Photo by Dena Mellick

Athletes’ Potential opened in Decatur at the end of February at 533 West Howard Ave., C1 in the Acme Lofts, and as the name suggests, it caters to athletes wanting to improve performance and recovery time.

Matta uses sci-fi-sounding tools like a cryotherapy chamber and intermittent recovery boots to help those with athletic goals recover more quickly. He says many elite sports teams are using both techniques.

“Falcons, Hawks, UGA, GA Tech – they all have similar facilities and Special Forces groups and that’s it, versus your average person who probably needs more help. So we wanted to provide that resource to everybody,” Matta said. “The populations that we see a lot of are the endurance community – runners, triathletes, cyclists, CrossFit athletes – people that are training fairly hard.”

Cryotherapy utilizes temperatures as cold as -202 degrees Fahrenheit. The Athletes’ Potential website explains, “The state-of-the-art Impact Cryotherapy chamber fills with nitrogen vapor, lowering your skin temperature. The treatment lasts an average of three minutes. Your head remains outside the chamber, and you can exit at any time.”

Athletes’ Potential Office Manager Claire Paskus demonstrated a cryotherapy session. The only required protective clothing for the three-minute session is gloves, socks, and soft boots. Paskus’ was able to hold a conversation while continuously moving around in the chamber. She said the short period of discomfort is worth it.

“The way I feel all day and how I sleep at night – I would do this every day,” Paskus said.

Matta said the cryotherapy has an anti-inflammatory effect. “First of all, when your body gets cold, its intention is to shunt the blood to the vital organs. All of the blood goes to heart, lungs, brain, visceral organs – it gets drawn to the torso. While it’s there, you are taking swelling with it as well — inflammation.”

Matta said the therapy initially started in the 70s as a drug-free method to treat rheumatoid arthritis. 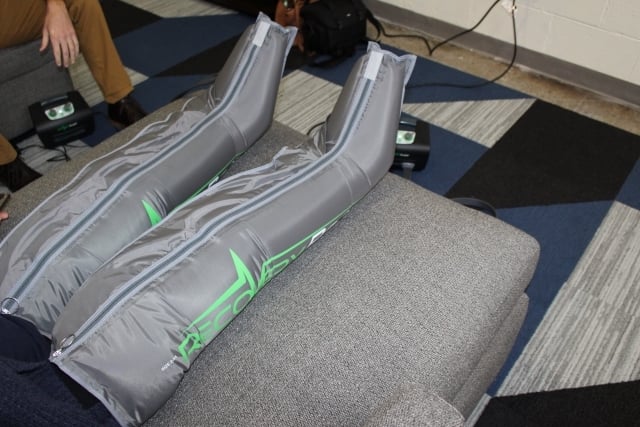 The therapist recommends following the cryotherapy with another tool of the trade – intermittent compression boots.

The large, flexible boots zip up to the thigh and fill with air before deflating – a similar feeling to a blood pressure cuff.

“What it does is it basically squeezes your feet, ankles, calves, knees, thighs, hips, and then it releases it, Matta said. “So it helps flush a lot of the breakdown from training that we have because gravity pulls us down, that’s where most of it goes out of the system. It helps really the lymphatic system pick it back up and be able to filter it out.”

The office has chaise lounges set up in front of a TV so clients can sit and relax for the 30-minute session with the recovery compression boots.

Matta said the therapy is for athletes at all levels – anyone trying to achieve an athletic goal. He noted that the recovery center is not meant for those with serious injuries, but he is able to help athletes use their bodies more efficiently to avoid pain and injuries.

“We had someone recently – she’s a powerlifter and she hadn’t added any weight to her lifts in a long time, probably six months,” he said. “She came in and did a recovery session and she went to the gym and added 10 pounds to her personal best squat that day. And she called us and said ‘whatever we did, I feel good.’”

The Decatur location is the second Athletes’ Potential. Matta and his wife, Ashley, Director of Operations, also own a West Midtown Office. Matta has his Doctorate of Physical Therapy from Baylor University. He spent seven years active duty in the Army as a physical therapist and worked with soldiers to manage and prevent injuries.

Matta said when it came to selecting a location for the athlete recovery center, Decatur seemed like a great fit.

“We thought this was something that was needed,” he said. “We saw that Decatur has a very active population. We already saw a lot of people from here – tons of runners, tons of endurance athletes, cyclists, triathletes and CrossFit athletes. It’s a cool community, very tight-knit, and we’re very lucky we were able to find space to be a part of it.”