Decatur School Board to consider adding $1.9 million in portable classrooms

Decatur School Board to consider adding $1.9 million in portable classrooms 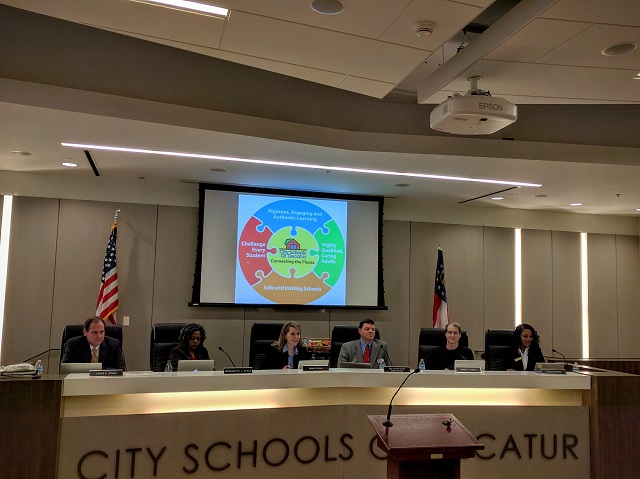 The Decatur School Board meets on Jan. 12. File photo by Dan Whisenhunt

With the possibility of renting Atlanta’s East Lake Elementary off the table, City Schools of Decatur is considering another, more costly solution to deal with its need for additional classrooms.

At its upcoming regular meeting, the School Board will consider a contract that will add $1.9 million worth of portable classroom space to the district.

The School Board meets on Tuesday, March 8, at 6:30 p.m. at CSD’s central office, located at 125 Electric Avenue. All meetings are open to the public.

The Portable Classrooms will be allocated as follows:

The $1.9 million price is lower than the original $2.7 million estimate for acquiring the additional portable classroom space. Renting East Lake would’ve been a far cheaper option. The estimated cost of year one of the proposed East Lake lease was $220,000. Superintendent David Dude said the “detrimental aspects” of a proposed lease – like moving students around, paying more money to transport them, and hiring more staff – outweighed the benefits of the proposal.

– It is likely there will be one or more people at Tuesday’s meeting speaking on behalf of media clerk Susan Riley, who was fired and later placed on paid administrative leave by Dude. Tom Stubbs, a local attorney who has been rallying other residents to Riley’s cause, said he plans to speak during the public comments portion of the meeting and others may join him. In an email to potential speakers, Stubbs urged Riley’s supporters to be respectful during their remarks.

“You can express disagreement with Dr. Dude’s actions, whether it is his judgment in making the decision or accepting without further investigation the portrayal of events on which he based his decision,” Stubbs writes. “You can question that activities of others who played a role in Susan’s firing and suggest a review of those activities. However, personally attacking a specific individual, including the Superintendent, Dr. Dude or other school employees, is not just against the rules, it is downright harmful to the cause.”

Dude has pledged to have a third party conduct an independent review of the firing, but so far the independent investigator hasn’t been named. Click here to read previous articles about Susan Riley’s case.

– The School Board will consider adopting a joint resolution with the Decatur City Commission in support of safety improvements along Scott Boulevard in front of Westchester Elementary.

Parents of that school launched a petition with the goal of making the road safer.