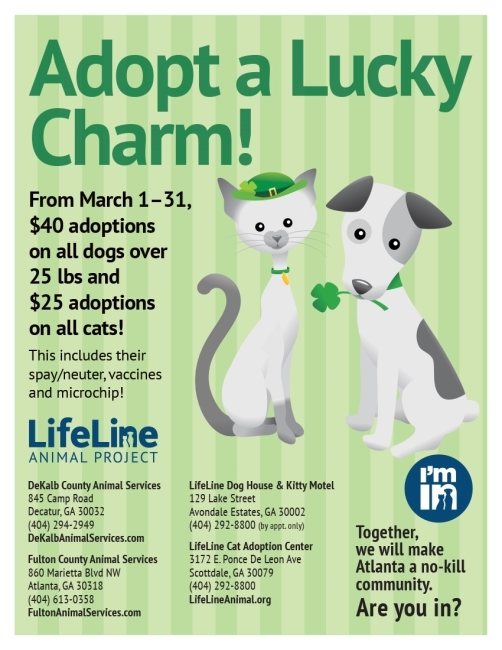 LifeLine Animal Project is celebrating achieving no-kill levels at one shelter by offering a March special.

LifeLine said in a press release that March marks the fourth month that LifeLine at Fulton County Animal Services (FCAS) has achieved no-kill levels, defined as saving 90 percent or more of the animals.

“This is a first for any open admission shelter in the metro Atlanta area,” the press release said. It also noted DeKalb County Animal Services (DCAS) is close to reaching no-kill with 85 percent of its animals being saved.

“Reaching a no-kill level has been our primary goal for the past three years, and it is a dream come true for all of us,” FCAS Director Lara Hudson is quoted as saying.

The press release says all of LifeLine’s shelters are participating in the Adopt a Lucky Charm promotion, including: FCAS, DCAS, LifeLine’s Dog House & Kitty Motel, and LifeLine’s Cat Adoption Center.

“The adoption includes the pet’s spay/neuter, microchip and vaccines – a $250 value at no cost.  To view animals available for adoption, for adoption rates, or for the shelters’ addresses and phone numbers, please visit www.dekalbanimalservices.com, www.fultonanimalservices.com or www.lifelineanimal.org,” the press release said.