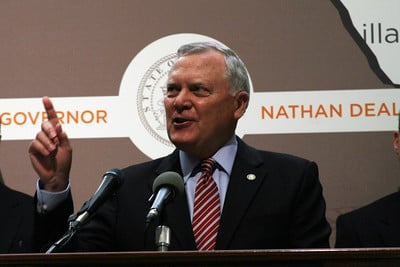 The bill was widely perceived to be a slight against gay, lesbian,  bisexual and transgender individuals and was widely condemned by companies doing business in the state. Most notably the film industry, which has been an economic boon to the state for several years, warned that the cameras would stop rolling if Deal didn’t veto the bill.

In announcing his veto on Monday, March 28, Deal said, “Some of those in the religious community who support this bill have resorted to insults that question my moral convictions and my character. Some within the business community who oppose this bill have resorted to threats of withdrawing jobs from our state. I do not respond well to insults or threats. The people of Georgia deserve a leader who will made sound judgments based on solid reasons that are not inflamed by emotion. That is what I intend to do. As I’ve said before, I do not think we have to discriminate against anyone to protect the faith-based community in Georgia, of which my family and I have been a part of for all of our lives. My decision regarding HB 757 is not just about protecting the faith-based community or providing a business friendly climate for job growth in Georgia.

“This is about the character of our state and the character of its people. Georgia is a welcoming state filled with warm, friendly and loving people. Our cities and countryside are populated with people who worship God in a myriad of ways and in very diverse settings. Our people work side by side without regard to the color of our skin or the religion we adhere to. We are working to make life better for our families and our communities. That is the character of Georgia. I intend to do my part to keep it that way.”

“I am pleased with the Governor’s willingness to uphold the values of Georgia,” she said in a press release. “I commend the Governor for doing the right thing. While this is a victory for all Georgians, there is still much work that needs to be done to guarantee full equality for all. I believe Governor Deal’s veto is the step in the right direction.”

State Sen. Elena Parent, D-SD 42, said Deal’s decision “comes as no surprise to me” given the corporate pressure he faced.

“I appreciate Governor Deal swiftly making it official that he would veto,” she said in an email to her constituents. “This is the right decision. The legislation was unnecessary, given the First Amendment to the US Constitution and a robust body of caselaw outlining freedom of religion over the centuries.  And the context within which it was passed, obvious animus toward the Supreme Court’s legalization of same-sex marriage, demonstrated that the measure did seek to allow people to be treated differently based on sexual orientation.”

The Bill’s supporters predicted the issue would be debated again in the next legislative session, and some are suggesting calling a special session to override the governor’s veto, according to the Atlanta Journal Constitution.