This Georgia city has two Jeopardy! contestants this week. What is Decatur?

This Georgia city has two Jeopardy! contestants this week. What is Decatur? 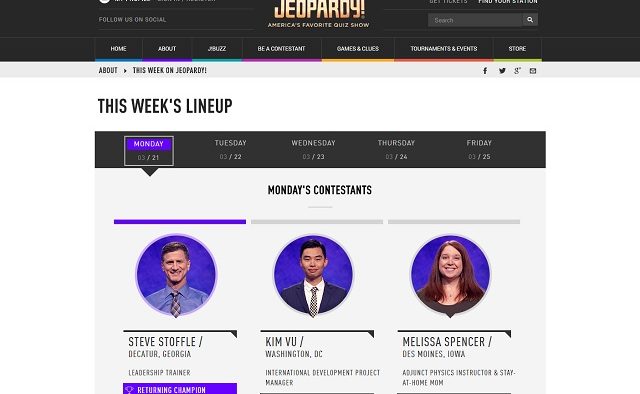 Decatur Jeopardy! fans are in for a treat this week.

Steve Stoffle, a leadership trainer, is a returning champion today, March 21, and has already won $17,599.

Claudia Stucke, a retired journalist and teacher, will be on the popular game show tomorrow night, March 22. The show airs at 7:30 p.m. on Atlanta’s 11 Alive.

Attempts to reach Stoffle were unsuccessful. Stucke, speaking by phone, said she’d enjoyed her experience and that it was one of the items on her “bucket list.”

“One thing I’m going to enjoy is watching it on TV,” Stucke said. She said she taped the show in February. “I don’t remember much of it because while you’re there you’re so focused on reading the board, listening to the questions and trying to answer them before anybody else does and that was hard.”

“If you see someone who’s won a whole week, they’ve been standing there for five games in row,” she said.

Stucke said she knows “a lot of random facts.”

“I don’t remember what I had for breakfast this morning, but I remember that Bach was born in 1685,” she said. “Things that stick in our long-term memory are still there. I volunteer with Alzheimer’s patients who remember World War II but don’t remember who they’re married to.”