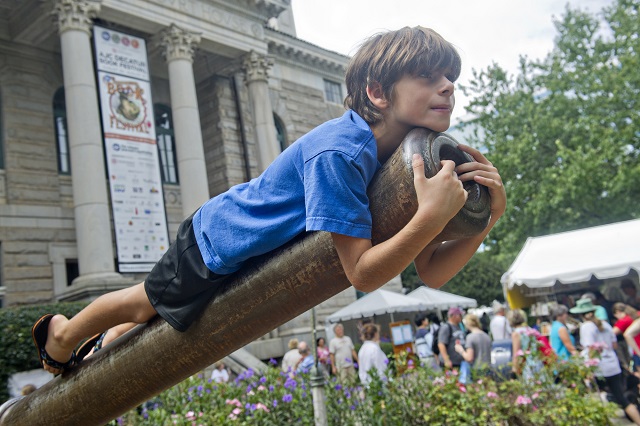 Staring at an empty, asphalt parking lot, it is easy to think: “anything would be better than this.” And anything probably would be. But do we want to settle for just anything?

Thirty-five years ago, peering over a downtown littered with surface parking lots, Decatur’s leaders were confronted with a proposal for massive, dense development on the scale of today’s Midtown Atlanta. Sure, it would be a whole lot better than surface parking lots. After all, it was anything. But they didn’t want to settle for anything; they wanted something better.

They were inspired to create our progressive, innovative, extremely successful 1982 Town Center Plan – and Decatur became something better.

Today, history repeats itself. Decatur residents are rallying to save a parking lot – half the Bank of America site on Commerce Drive – from being developed into just anything. We want something better. We want a park.

Because Downtown Decatur has changed a lot in thirty five years. Skyscrapers may not loom over Downtown, but most of those empty surface parking lots are long gone – replaced by apartments and condominiums. Between 2015 and the redevelopment of the Callaway Building next year, another 850 new homes will have come to Downtown – increasing the number of ALL Decatur homes by more than 10 percet in less than three years. Already, nearly three in ten Decatur families lives Downtown.

And while we have new homes, new restaurants, and new schools – we don’t have any new parks. Despite the fact that the amount of Decatur parkland ranks well below the national average. If we want a downtown park – one that serves not just downtown residents, but everyone who visits or works downtown – we need land. And we need it fast.

Thirty-five years ago, Decatur’s leaders may have had a hard time imagining such a state of affairs. For today’s leader, the state of affairs is clear. For more than two years, Downtown residents have been calling on City leaders and staff to acquire land for a downtown park. In that time, five major developments have come to downtown. Next year, a new Hampton Inn will break ground on an acre of greenspace on Clairemont next to the Courtyard Marriot. The Callaway Building by the high school will come down, redeveloped with offices, retail and more than 230 new apartments.

In short, over the course of two years, the need for the city to acquire downtown land for a park has grown from pressing to urgent. Wait much longer, and there will be no more vacant space that could become a park. Tear down a five-story condo to build a park? Ain’t gonna happen.

Funding seems to be the major hurdle – a hurdle that was identified more than a dozen years ago in the City’s 2003 Athletics Facilities Master Plan. The plan calls for more than $17 million to fund athletic facility improvements. Recognizing that the need for funding has grown, Downtown Decatur Neighbors (DDN) identified nearly a dozen ways to finance a new downtown park at a 2014 presentation to the City Commission.

In 2015, the City Commission used one of the recommended funding mechanisms, known as a “tax allocation district” or TAD, to fund projects that would include creating a new park – at East Decatur Station.

The City also acquired five parcels of greenspace (not downtown, not really parks) in 2015 – found $500,000 in an attempt to expand Dearborn Park – and found $260,000 to purchase land for additional downtown housing (what the city is calling a “cottage court” development).

Right now, we do not. City leaders seem content to let that parking lot become just about anything – most likely another apartment building. Getting a park is going to take a little work.

Thirty-five years from now, will that parking lot be a park or just more apartments? Sending an email and attending the meeting may make the difference.