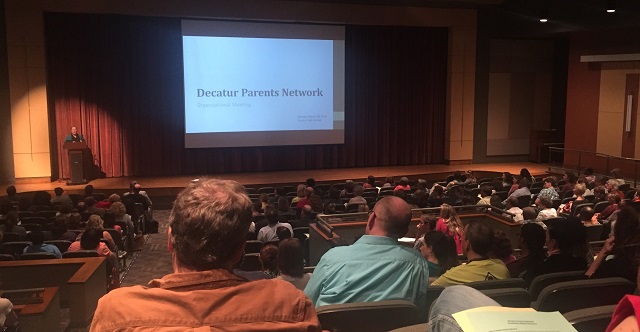 As the community focuses on the “alarming rates” of risky behavior by Decatur high school and middle school students, the city is also doing its part to raise awareness about alcohol use among teenagers.

According to the resolution, “The recent Georgia Student Health Survey for Decatur indicated that 31 percent of high school-aged youth reported drinking alcohol in the last 30 days.”

In that same survey, about 45 percent of 12th graders said they had at least one drink in the last 30 days, compared to 35 percent nationally and 21 percent across the state. Last month, nearly 300 community members and parents filled the Decatur High School Performing Arts Center to discuss the recent survey results. Several violent incidents involving high school students have also caused concern among parents.

Groups working to address these issues include the Decatur Prevention Initiative and the recently-formed Decatur Parents Network.

The Decatur Prevention Initiative is asking parents to complete a short, anonymous survey to assist in its efforts to tackle the problem: www.surveymonkey.com/r/decaturparent

“The information gathered will be shared at the upcoming DPI Town Hall meeting on April 28 at 7 p.m. at the Ebster Recreation Center,” a press release says.