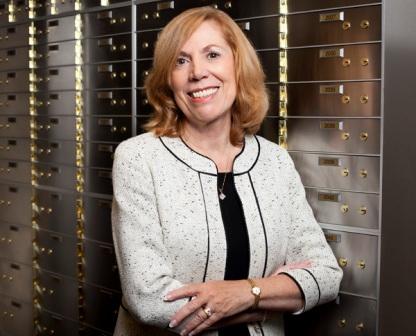 Private Bank of Decatur has announced that Judy Turner is retiring as president effective May 31.

Brent Adams will be her successor. He will continue to serve as business development for the entire bank and remains Executive Vice President and Senior Lending Officer for Private Bank of Buckhead, which owns Private Bank of Decatur.

Turner has spent more than half her career in the city of Decatur.

“I’ve remained in banking so long because I enjoy the interaction with the customers and the ability to help people and the community,” Turner said in the press release. “In fact, it has never felt like work to me. It just feels like I’ve been able to help people accomplish their goals.”

According to her biography on the Private Bank of Buckhead website, Turner started her banking career in the personnel department of Citizens & Southern National Bank.

“She worked in Auditing, became one of the first Personal Bankers when C&S started that program, and became an officer of the bank in 1974,” the website says. “A year after C&S became NationsBank (1995), Judy had an opportunity to go to work in the Decatur Office of Bank South. Three years later Bank South was purchased by NationsBank and several community leaders felt a need for a community bank in Decatur. They looked to Judy to organize and lead Decatur First Bank, where she was President and CEO. In November of 2011, Judy had the opportunity to join Private Bank of Buckhead to organize and open Private Bank of Decatur.”

Decatur First Bank was later closed by Georgia Department of Banking and Finance in 2011 and the Federal Deposit Insurance Corporation was named as the receiver.

According to the website, Problembanklist.com, “Decatur First Bank was founded in September 1997.  During the real estate boom, Decatur aggressively expanded its lending and more than doubled assets between 2003 and 2008. The ensuing real estate crash and financial crisis quickly resulted in soaring loan defaults. By June of [2011], the Bank had an astronomical troubled asset ratio of 444 percent.  Virtually every bank with a troubled asset ratio in excess of 100 percent winds up failing.”

Turner is heavily involved in the community and her name has been attached to numerous events and organizations including the Decatur Book Festival, the DeKalb History Center and the Junior League of DeKalb.

“She has served on the boards of both the Community Bankers Association and the Georgia Bankers Association, as well as Leadership DeKalb, the Development Authority of DeKalb County (former Chair), and the DeKalb Medical Foundation,” the Private Bank of Buckhead website says.

She lives in Decatur with her husband, Roy. The website says they have a daughter and twin grandchildren.

“In 2011, at a time when she could have been resting on the laurels of a remarkable career in banking, Judy joined us to help structure and open Private Bank of Decatur,” says Charlie Crawford, President, CEO and Chairman of Private Bank of Buckhead. “Judy and her team opened the doors of the Decatur location in October 2012. Notably, last year about this time Judy celebrated a milestone of 50 years in banking. I am honored and proud to have worked with Judy, and look forward to her continuing support of the bank. Among other ways, Judy will remain active as a member of the Private Bank of Decatur Board of Advisors.”

Crawford notes that, as Adams takes on additional responsibilities at Private Bank of Decatur as its President and spends the majority of his time there, he will continue to oversee business development for the entire bank and remains Executive Vice President and Senior Lending Officer for Private Bank of Buckhead, the parent organization. Adams will celebrate his 10th anniversary with the bank this summer as he was one of the founding employees who helped organize the bank prior to its opening.
More…

“I appreciate Brent’s willingness and flexibility,” Crawford says. “Brent and Judy will be working together to ensure a smooth transition. It’s worth noting that they have worked together in the past at Bank South in Decatur, and they both have worked with Decatur Branch Manager Juanita Marzette previously, so this transition seems all the more natural.”

“I’ve remained in banking so long because I enjoy the interaction with the customers and the ability to help people and the community,” Turner says. “In fact, it has never felt like work to me. It just feels like I’ve been able to help people accomplish their goals.”

Adams says he looks forward to further involvement with the bank’s customers in Decatur and beyond. “Private Bank of Buckhead chose Decatur as its first market expansion because of great bankers and great customers. I am proud to take the baton from Judy, knowing that bringing Private Bank of Decatur into its fourth year has been a labor of love for her. Judy and I share the philosophy that community involvement and the personal touch are integral to community banking, and I take that tradition seriously.”

Crawford says that, as part of the transition, the bank will be holding both internal and community events to salute Turner and welcome Adams to his new role.

“It’s gratifying and a bit humbling that Judy chose to round out an exceptional career with us,” he says. “What has continued to set us apart is first-class banking and financial services delivered by highly experienced professionals like Judy and Brent and their teams in Buckhead and Decatur, and this handoff ensures our continuing commitment to building long-term, first-name relationships with our clients.”

Private Bank of Buckhead is now in its 10th year.