Supporters speak for media clerk at Decatur School Board meeting

Supporters speak for media clerk at Decatur School Board meeting 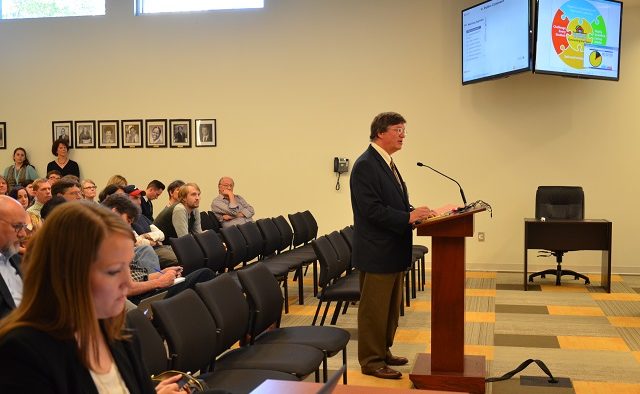 Tom Stubbs urges the school board and Superintendent David Dude to reinstate media clerk Susan Riley, while members parents and members of the community listen. Photo by Mariann Martin
Share 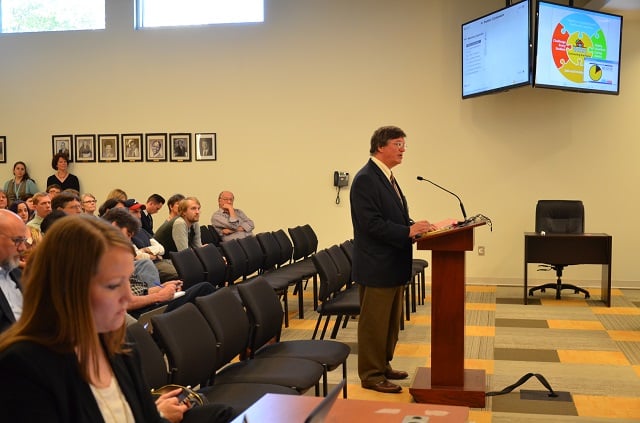 Tom Stubbs urges the school board and Superintendent David Dude to reinstate media clerk Susan Riley, while members parents and members of the community listen. Photo by Mariann Martin

Officials said the investigation into the firing of Decatur High media clerk Susan Riley is concluded, but have not provided any additional details.

The School Board and Superintendent David Dude did not discuss the issue during the April 12 school board meeting. Dude said no announcements would be made at the meeting regarding Riley.

After the meeting, Dude confirmed the investigation has concluded. It is not clear when an announcement about Riley will be made.

Riley, who has worked at Decatur High School for 19 years and was a long-time student favorite, was unexpectedly fired in February. After an outpouring of community support, Dude rescinded the termination, placing her on administrative leave. Jonathan Poole, with Strickland Brockington Lewis, was brought in to investigate the circumstances in the case.

A large crowd, many there to support Riley, filled the school board meeting room and applauded after two community members spoke in support of Riley during the public comment portion of the meeting.

Local attorney Tom Stubbs, who has been an avid supporter of Riley since her termination, thanked the board and Dude for their efforts. He also noted the toll the issue has had on Dude and members of the community.

“At 5:45 a.m. I was corresponding via email last week with your superintendent,” Stubbs told the board. “There are other who corresponded with him at 1 a.m. … His efforts I know are in no small part driven by what’s going on with this investigation. His time is being taken up at a pace that is just not sustainable and I want to thank him for the effort, but I want to urge the board to help show him that our priorities are for a long-lasting superintendent who loves his job because he is supported in all the ways that we would want somebody to be supported.”

“If this board and you, Dr. Dude, allow truth and facts to prevail, I know Susan will be reinstated and back at DHS being the unique, magical force that she is and has been for [19] years for staff and student alike,” Gorbatkin said.

But she also urged the school to address any false information that may have surrounded Riley’s firing, saying, “Implicit in that outcome, however, is the sad fact that your superintendent had to have been lied to by the staff he relied on to bring him the facts, or at the very least, his staff failed to perform due diligence. I have good reason to believe it is the former. If so, if lies were told, facts manipulated, those responsible need to be terminated. Decatur should have no tolerance for people who knowingly do bad things to good people, and Susan Riley is as good as they come. Please right the wrongs soon and address thoroughly what caused the wrong.”

The School Board held a closed-door executive session at the end of the regular meeting to discuss personnel and property issues. It is not known whether Riley’s case was discussed during the session.

During the regular meeting, the School Board discussed the strategic plan that is being put together by Decatur school staff and community members. The school system recently called for community input, the results which are still being analyzed, Dude told the board.

Several board members said they would like to know more about the plan and the process of compiling it, especially the goals and mission that will be part of the plan.  Dude agreed to provide additional details.

The board also agreed they need to look more closely at how to offset a senior homestead tax exemption that is scheduled for a referendum in the fall. The exemption is expected to slow the growth of families moving into the community due to seniors remaining in Decatur, board Chair Anne Caiola said. She noted that reduced austerity measures from the state and a tax digest increase might also help offset the impact of the expanded homestead tax exemption.