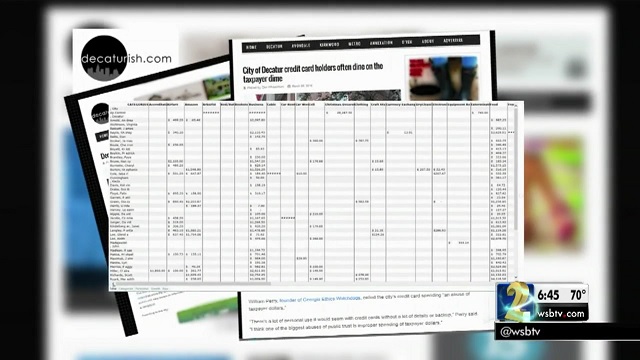 Atlanta’s WSB-TV asked city of Decatur officials some pointed questions about employees’ use of city-issued credit cards, following an investigation by Decaturish.com.

Our original story revealed that in 2015, city employees spent more than $42,000 on food, in many cases eating “working lunches” at local restaurants. That policy appears to be unusual compared with the policies of other cities. WSB-TV cited our story and research in its report.

City Manager Peggy Merriss told WSB-TV that there was nothing unusual about Decatur’s credit card spending.

“There’s nothing extraordinary about how the cards have been used,” Merriss told reporter Dave Huddleston.

However, the city has begun review of its credit card policies and practices in response to Decaturish.com’s inquiry.

“And we certainly think that’s worth looking at,” Merriss told the TV station.

The city is considering putting limits on how much and where the cards can be used and rotating people who can approve the expenses, WSB-TV reported.

“We think it will improve and make the policy even better,” Merriss said.

Perry told WSB-TV, “I think it’s good news that they’re improving their policies and procedures. The bad news is that perception doesn’t seem to sink in. I think you ask any voter in Decatur, ‘Is this appropriate spending?’ and I don’t think they would say yes.”

Merriss told WSB-TV the new policies would go into effect on July 1.