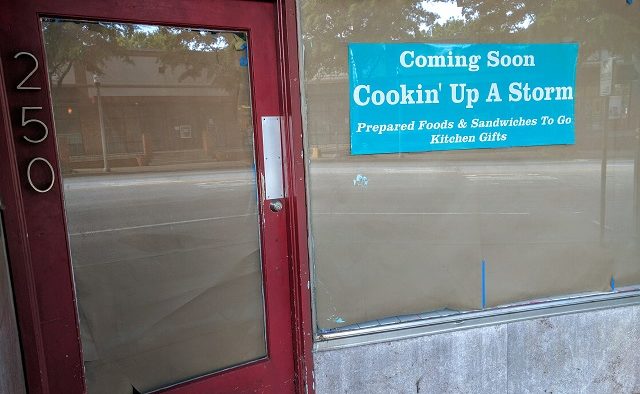 Cookin' Up a Storm is moving into the space formerly occupied by Sawicki’s in Decatur. Photo by Dan Whisenhunt
Share

That will leave the Decatur Bikes space vacant. Catherine Lee, downtown development manager for the city of Decatur, said Pinewood plans to expand its dining space into the former Decatur Bikes location. But Lauren Tee, a spokesperson for The Pinewood, said that is no longer the case. She did confirm that Pinewood has been exploring the possibility.

“They haven’t come to an agreement with any of the landlords so right now it’s not happening,” she said. “I wish it was. It’s something they’re interested in doing. I think they’re exploring the opportunity but it’s not worked out at the moment.”

Cookin’ Up a Storm is owned by Robin DeVos and is the second location of the Jackson, Miss.-based business.

“We do prepared food that people grab and take home for dinner,” she said.

The most popular item on the menu is chicken spaghetti, she said. The restaurant sells fresh and frozen entrees, like lasagna, chicken pot pie and chicken salad.

“We cook pretty much every day all day and we fill up our refrigerator and our freezer,” she said.

Cookin’ Up a Storm will also serve made-to-order sandwiches. All food will be take-out only, she said.

Her goal is to open by July 1. DeVos said she lived in Atlanta when she left college and has friends in the area. She opened her Jackson, Mississippi store in 2010. She has relocated to Decatur to oversee the new store.

“I couldn’t stay [in Mississippi] and just do that,” DeVos said. “I wanted to do it more than once and do it somewhere I loved, and I love it here and I love living here. It’s just a great community.”

Mark Scarbrough, general manager of Decatur Bikes, said the store may reopen at its new location in a month. The business is still in the permitting phase, he said.

“We’re building out a nicer, cleaner look store that fits better with new Decatur,” he said.

And what is new Decatur?

“To me it’s lots of apartments, younger folks moving in,” he said.

Correction: An earlier version of this story contained an incorrect spelling of a name. This story has been updated with the correct information.