The House District 82 race is shaping up to be a battle between an older generation of Democrats and a newer generation looking for a change.

Brian Westlake believes he represents the future of Georgia’s Democratic party. He wants to unseat a longtime incumbent, state Rep. Mary Margaret Oliver, D-Decatur, because he believes she is too closely allied with Republicans on some key issues.

“I do believe if Democrats ever want get back into the majority, ever want to start winning statewide races again, we’re going to have to start rebuilding the party,” said Westlake, a U.S. Marine corps veteran and a public high school teacher. “That means recruiting candidates and building a bench and you can’t do that with the team that was there when Ronald Reagan was president.”

“I think there’s always a need for new blood,” Oliver said. “There is a significant turnover down there. Of the few people that are able to stay … I am one of those people who make as significant contribution every day. There are some people who are retired mentally and I’m not one of them.” 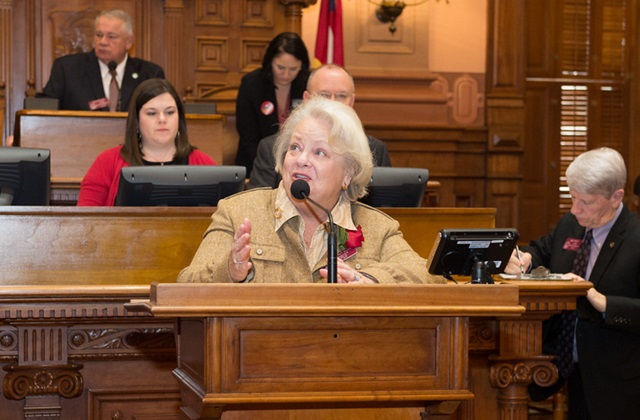 The Democratic Primary is May 24 and early voting  began on May 2.

Westlake and Oliver each have a pile of endorsements. Westlake, who has objected to Oliver’s vote in favor of Gov. Nathan Deal’s Opportunity School District, has the endorsement of several educational associations, including the Georgia Association of Educators, the Georgia Federation of Teachers, and the Organization of DeKalb Educators. Oliver is being supported by the Georgia WIN List, a pro-choice advocacy organization, and Georgia Equality and the Georgia Stonewall Democrats, LGBT advocacy groups. She also received an “F” rating by the National Rifle Association, which she is proud of. Additionally, a number of elected and civic leaders have endorsed her, including state Minority Leader Rep. Stacey Abrams, Decatur School Board member Garrett Goebel, Decatur Mayor Patti Garrett, Decatur Commissioner Tony Powers, and state Sen. Elena Parent.

Oliver defended her vote on the Opportunity School district. She said she supported it because she believes there isn’t enough emphasis on addressing child poverty in her district and throughout the state.

“I think there is a need for state focus and this is what Gov. Deal is putting his reputation on the line for, state focus on serving these children who have these obstacles,” Oliver said. “Educational success is tied to poverty and we are not addressing that effectively.”

She said her opponent is a “one-issue guy.”

But it’s a big issue for Westlake.

“She was one of the few Democrats who sided with the Republicans to vote for Nathan Deal’s Opportunity School District, which was terrible policy,” Westlake said. “It was molded on what happened in Louisiana and Tennessee. In Louisiana it’s failed miserably, and in Tennessee there’s been a bipartisan effort to move away from it. That would’ve never happened if it had not been for Mary Margaret and a couple of other Democrats.”

Westlake added that he’s voted for Oliver in the past. Now, he feels it’s time for different leadership.

“There’s this feeling Mary Margaret has been there all this time, it’s a very solidly Democratic district, I think people make the assumption that she’s been representing it so long she shares the values of the community,” Westlake said. “I’ve certainly sided with her and voted for her in the past. I know she’s done some things I could agree with but she’s made some really bad votes recently. I believe she’s gotten really out of touch.”

“I think House District 82 is unusually blessed,” she said. “We’re better off. We’re better educated. I think we have a lot to offer. I’m committed with the good committee appointments I have in marching forward with their issues which are not the issues of the Republican establishment, for the most part. I have a skill set. I enjoy it. I’m ready for the fight. I’m still actively practicing law. The second public service job suits me and suits my personality.”