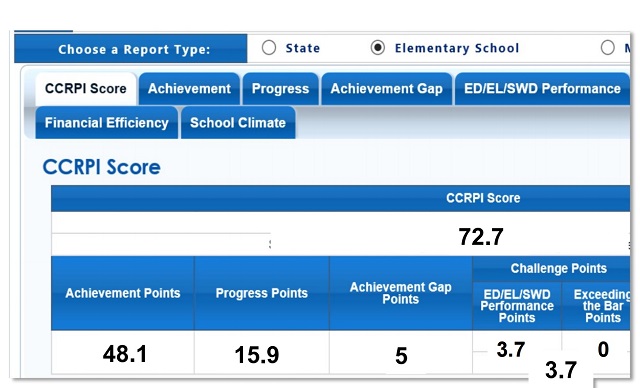 The state of Georgia has released College and Career Ready Performance Index scores for 2015. Atlanta and DeKalb County made gains in student performance, while City School’s of Decatur’s score dropped slightly over the previous year.

A City Schools of Decatur spokesperson says changes to the state calculation of the scores means that the city’s elementary schools, which are K-3 instead of the more common K-5, did not receive an overall CCRPI score.

The 100 point score is comprised of four parts: Student Achievement, 50 percent, 40 percent progress, and 10 percent for closing the achievement gap, a measure of how schools address the disparity in achievement of different groups of students. Schools can also earn “challenge and exceeding the bar” points, meaning a school could potential have a score of higher than 100.

To view the most recent CCRPI scores, click here.

“GaDOE decided that primary schools would not receive a CCRPI score for 2015,” CSD spokesperson Courtney Burnett said. “Two years of test data are now required to calculate the achievement gap and progress portions of the CCRPI score. The required state tests (Georgia Milestones) are only given in grades 3-8. As a result, CSD K-3 schools are unable to receive a progress score, achievement gap score, and an overall CCRPI score.”

Atlanta Public Schools said seven schools, including Toomer, have been removed from the OSD takeover list because of the improvement in CCRPI scores.

“After recalculating the CCRPI scores for current and planned mergers and one school closure, APS now has 19 schools that have three years in a row of CCRPI scores below 60 (compared to 27 in 2014),” a press release from APS says. “While seven schools made sufficient gains to move above the OSD criterion of 60, two additional schools became OSD-eligible because they did not reach a score of 60 for the third consecutive year.”

DeKalb County reports that “nearly all” of its OSD-eligible schools are on-track to leave the list.

Here is the full press release from DeKalb County Schools:

The DeKalb County School District has shown significant academic growth in the College & Career Ready Performance Index (CCRPI) for school year 2015 recently released by the Georgia Department of Education. All three categories of schools (high, middle, and elementary) received nearly 34 or more points out of a maximum of 40 points for academic growth (progress) as follows:

“Our students demonstrated significant academic growth, which is a precursor to achievement,” Superintendent Dr. R. Stephen Green said. “Learning comes from mastering content and our students are proving they are making progress. By continuing our laser focus on classroom instruction with the best teachers, who are fairly compensated, properly motivated, and retained for the long term, we will continue to see our students grow and excel.”

Fourteen schools scored the maximum 40 points for growth (progress) and include:

There were 11 very high performing schools with CCRPI scores exceeding 90 points as well as four schools that exceeded the 100-point scale by earning additional bonus points and include:

“The DeKalb County School District is regaining its rightful place as a leader in public education,” said Dr. Green.  “We have regained full accreditation, built a modest fund balance through fiscal responsibility, and give all our principals and teachers a needed pay raise as well as increasing SAT scores by 103 points, improving graduation rates by more than 10 points, and being a leader in STEM education.”

“Our students, parents, and staff are dedicated and working hard to improve academic growth, said Dr. Green. “Now that we are not distracted on matters other than academics, we can put the focus back where is needs to be… in the classroom.”

The CCRPI is Georgia’s statewide accountability system, implemented in 2012 to replace the No Child Left Behind (NCLB) Adequate Yearly Progress (AYP) measurement, after the U.S. Department of Education granted Georgia’s waiver from NCLB.  It measures schools and school districts on an easy-to-understand 100-point scale, helping parents and the public better understand how schools are performing in a more comprehensive manner than the pass/fail system previously in place under AYP.

Here is the full press release from Atlanta Public Schools:

ATLANTA – In a year of more rigorous assessments, 46 schools in Atlanta Public Schools (APS) showed gains on the state’s latest College and Career Ready Performance Index (CCRPI) results released today by the Georgia Department of Education. In addition, of the original 27 schools identified by the state in 2014 as low performing and eligible for possible state takeover by a proposed Opportunity School District (OSD), seven achieved large enough gains to be removed from OSD eligibility.

As a district, the average CCRPI score rose from 62.6 points to 66.8 points overall compared to 2014 results, according to the state’s report.

CCRPI is the statewide education accountability system that measures schools and districts on a 100-point scale. It helps parents and the public understand how schools are performing compared to others in the district and state.

After recalculating the CCRPI scores for current and planned mergers and one school closure, APS now has 19 schools that have three years in a row of CCRPI scores below 60 (compared to 27 in 2014). While seven schools made sufficient gains to move above the OSD criterion of 60, two additional schools became OSD-eligible because they did not reach a score of 60 for the third consecutive year.

“These results give me hope that we are making progress in transforming Atlanta Public Schools,” said APS Superintendent Meria J. Carstarphen. “But while we are pleased to see some improvements, especially in those schools previously eligible for state takeover, we clearly have much work to do toward improving student achievement.”

While the district and state overall scores increased, these scores are not directly comparable to 2014 scores due to both the GaDOE changing its assessments from the former Criterion-Referenced Competency Tests (CRCT) to Georgia Milestones and due to the GaDOE adjusting the CCRPI calculation towards a greater emphasis on progress over achievement.

Here is the full statement from City Schools of Decatur spokesperson Courtney Burnett:

Two major changes in calculations had a significant impact on our K-3 schools for 2015.

1. GaDOE decided that primary schools would not receive a CCRPI score for 2015.  Two years of test data are now required to calculate the achievement gap and progress portions of the CCRPI score.  The required state tests(Georgia Milestones) are only given in grades 3-8. As a result, CSD K-3 schools are unable to receive a progress score, achievement gap score, and an overall CCRPI score.

The Achievement Gap size is determined by calculating the difference between a school’s lowest performing quartile of students and the state average on the Georgia Milestones. Gap progress is measured by using the Student Growth Percentile of a school’s bottom quartile of students. For each content area, each school’s final score will be the greater of the gap size rubric score and the gap progress rubric score. This enables schools to earn points by either having a high achieving lowest 25% or by making significant progress with their lowest 25% based on prior scores. There is no gap progress measure for K-3 schools because they do not have two years of end-of-grade data. The end-of-grade assessment is only given in grades 3-8.