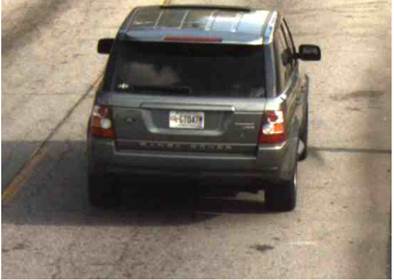 Atlanta Police believe this Range Rover is one of the vehicles used in the smash-and-grab burglaries on May 11.
Share

Atlanta Police believe this Range Rover is one of the vehicles used in the smash-and-grab burglaries on May 11.

Atlanta Police believe the same suspects are involved smash and grab burglaries that occurred on May 11.

Police believe that a Honda Accord stolen from 448 Moreland Avenue in Zone 6, which serves Kirkwood, on May 10 was used in one of the incidents.

A police officer responding to a business burglary call near St. Charles Avenue found the Accord wrecked into the front of an Urban Outfitters.

The suspects fled westbound on St. Charles Avenue. When officers were conducting a canvass of the crime scene they found a cell phone on the ground that one of the suspects left behind. The cell phone was ringing when the officers recovered it.

As the officers were conducting their investigation, police received notice of another business alarm going off at 2233 Peachtree Street Northeast involving the same vehicles. The police lost sight of the vehicles at Peachtree Street and Collier Road.

Two stores on 2333 Peachtree Street had the glass of their front windows smashed with a rock.

“The suspects fled when security arrived,” the police report says. “Neither business appeared to be entered. There was possibly a hat left at the scene from one of the suspects.”

A short time later, there was another business alarm call at 495 Whitehall Street Atlanta. This incident also involved the same vehicles.

In that incident, the suspects stole a cash register containing $586.