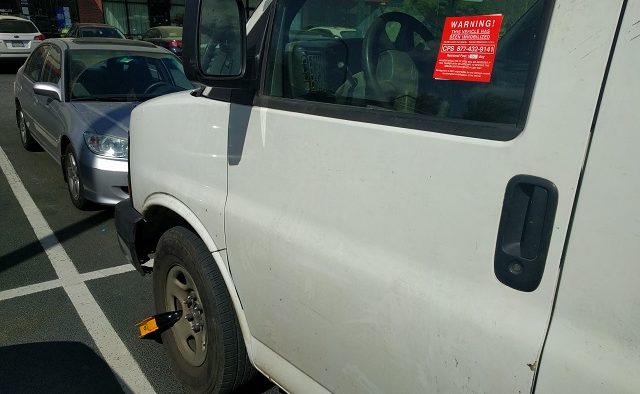 A van in the CVS parking lot in Decatur with a boot on the front tire. Photo by Dan Whisenhunt.
Share

There are numerous stories about run-ins with opportunistic parking attendants in the city of Decatur.

According to data released by the Decatur Police Department, officers called to intervene in booting disputes are busier than ever. Calls to resolve these disputes increased 188 percent from 2014 to 2015, records show.

The officers often don’t file reports, but on rare occasions these encounters have resulted in criminal charges for one of the parties involved.

“We created a booting call category in the Computer Aided Dispatch system in March 2010 due to the increased number of calls we were receiving related to booting,” Decatur Police Lt. Jennifer Ross said. “However, the vast majority of the calls are civil complaints and result in an officer speaking to the complainant and explaining that the companies are operating in compliance with city ordinance and that we cannot make them remove the boot.”

Parking in one lot and shopping at a store served by another lot is an almost guaranteed booting these days. Unwary drivers are forced to pay upwards of $100 to get the locking mechanisms off their vehicles.

But Decatur’s City Manager recently called some of the parking enforcement behavior “predatory.”

For instance, there are drivers say they’ve paid to park and have been punished anyway. In another case recounted at a recent City Commission meeting, a driver was booted after they left the property to get cash because the credit card machine wasn’t working.

Because booting occurs on private property, it is a civil and not a police matter. But the police often become involved when the booter and the booted cannot resolve their differences peacefully.

The Decatur City Commission will soon consider tightening regulations on booting cars parked in private lots. City Commissioners considered capping the fees at $40, but a local booting company representatives protested. Capping the fees would make the enforcement contracts unprofitable, they said. A revised list of changes to the current ordinance is on the May 16 City Commission meeting agenda. It caps the fees at $75, which is the cap in the city of Atlanta. To read the full list of proposed changes to the ordinance, click here.

Complaints about the booting often fall to the city’s police officers to resolve, records show.

The increase in the last two years appears to be driven by increased booting along West Ponce de Leon Avenue, specifically by the CVS and the SunTrust Bank building. In 2015 and 2016 police responded to about 150 calls at parking lots serving these two locations. They didn’t respond to any calls at these locations in 2013 and 2014.

A dispute at the CVS lot in June 2015 resulted in a felony charge for one man who tried to remove the boot from his wife’s Lexus SUV.

The man told the officer he had been looking for a place to park and a man, later identified as the parking attendant, told him it was OK to park in the CVS lot. The man pointed in the direction of the DeKalb County Courthouse and asked the attendant if that was the courthouse. The attendant said it was. When the man came back from the courthouse he found the yellow and black wheel clamp on his wife’s Lexus. The man confronted the parking attendant.

The attendant told the responding police officer he hadn’t even talked to the man until he returned to find the boot on his vehicle. The officer tried to get both sides to agree to a resolution, but the man asked if he could remove the boot himself. The officer advised him he’d be liable for the damage. He left it up to the man to decide whether he wanted to attempt removing the boot himself. The attendant wanted the officer to threaten the man with arrest if he tried to remove the clamp. The officer said he’d write up a report at a later date

“During the encounter both, parties were uncooperative and not forthcoming with the truth,” the officer noted.

The officer left and was later called to return because the situation had escalated.

“Within minutes, a good Samaritan arrived and offered to pay for the clamp to be removed,” the officer wrote.

But the attendant refused to accept the payment or assess damage to the clamp. Later the damage to the property was valued at $750. The man was charged with criminal damage to property in the second degree, a felony. Lt. Ross said the case was later settled and the felony charges were not pursued.

“Both parties appeared before a judge and the matter was resolved,” Ross said. “No arrest was made.”

The police reports show that there were two citations issued in 2013 involving disputes with parking attendants.

The report says the parking attendant was yelling “F*%! you!” at the Comcast supervisor.

The Comcast employee who parked the vehicle reportedly said, “Black people should not be acting like this, we are all brothers.”

The parking attendant responded he was not the Comcast employee’s “bro.”

Things escalated from there. According to the report:

At one point, [the parking attendant] walked to his personal vehicle and [the Comcast employee] thought [the attendant] was getting something out of his vehicle to harm him.

The attendant informed the Comcast employee and supervisor to “get off his property” or he would boot both of their vehicles. That’s when the supervisor called the police. The officer arrested the attendant for disorderly conduct and took him to jail.

The attendant called out to the woman who ran to the Iberian Pig restaurant and locked herself in the bathroom. When the officer arrived, he found that the woman was still locked in the ladies restroom. She refused to come out for several minutes, the report says.

Eventually she relented. When the officer asked her if she had let the air out of the attendant’s tires, the woman said, “she didn’t like [the attendant] booting her vehicle.” The woman received a citation for criminal trespass.

Decaturish asked Lt. Ross whether the Police Department has any position on whether the current booting ordinance needs to be changed.