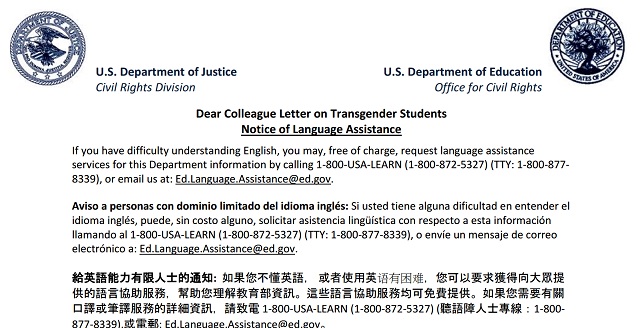 School systems in Atlanta, DeKalb County and the city of Decatur already have policies that prohibit discrimination based on gender identity.

One section of the letter issued by the U.S. Department of Justice and U.S. Department of Education is getting most of the attention. It deals with access to bathrooms and locker rooms, saying, “A school may provide separate facilities on the basis of sex, but must allow transgender students access to such facilities consistent with their gender identity.”

Failure to do so would violate federal anti-discrimination law, known as Title IX, and could put a school systems’ federal funding in jeopardy.

Atlanta and DeKalb County Schools responded to the letter by saying they support students regardless of their gender identity. City Schools of Decatur Superintendent David Dude said he has not seen the letter, dated May 13.

“I have not received the federal guidelines that were supposedly sent to all school districts so I will withhold any comments until those arrive and are reviewed,” Dude said.

While the new guidelines offer more detail about how school systems are to comply with federal law, DeKalb County Schools, APS and CSD already have adopted “Equal Educational Opportunities” policies that specifically include gender identity.

“The board of education believes that all students are entitled to equal opportunities for a quality education and does not discriminate on the basis of race, color, religion, sex, national origin, disability, age, marital status, sexual orientation, or gender identity in its employment practices, programs, activities, or student placement.”

Gwinnett County Schools has made headlines for saying the proposed guidelines, “infringe upon the abilities of school districts to determine appropriate education policy, procedures, and practices for their students.” The school system has offered gender neutral facilities for transgender students. Gwinnett’s Equal Educational Opportunities policy does not mention gender identity, according to a version posted on the school system’s website.

“The federal government has been marching toward this kind of support for a while,” Mitchell said.

She said the administration’s letter is a reaction to laws passed in other states, most notably in North Carolina, that the require transgender individuals to use bathrooms based on the sex listed on their birth certificates.

“This has been one of those situations where it didn’t become an issue until somebody decided to make it an issue,” Mitchell said, noting that cities like Atlanta have offered protections for transgender individuals for years.

Glenn said the letter didn’t come as a shock to her either.

“It was pretty exciting, but not really all that surprising because the Obama administration has already demonstrated quite ably they’re on our side when it comes to transgender equality,” she said.

Mitchell said the people up in arms about the new guidelines are a small – but loud – minority.

“This is a very small segment of the population making a very loud noise that doesn’t reflect really anything anymore,” she said. “It’s distortion politics and it’s really bad distortion politics. It’s taking the most uneducated and the most vulnerable members of my community and terrifying the f*&! of them, because they think tomorrow the whole thing could snap and then we’d get all rounded up and gestapo-ed by all of them. I guess that’s certainly a possibility, but not a very close one.”

Decaturish asked Glenn what she would say to people who are concerned about people using bathrooms that align with their gender identity as opposed to their sex at birth.

“I would tell them to relax, because we’re not a threat to anybody and we’ve been using public restrooms for decades without any trouble whatsoever and they’re not going to deny us the right to use any public restrooms,” she said. “If they force us to use the ones that aren’t aligned with our gender identity then that’s just going to cause problems for everybody, especially for children who are the members of society who least need to have trouble made for them.”