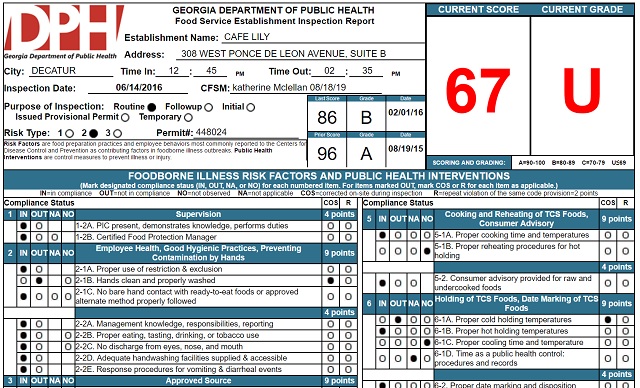 Decatur’s Cafe Lily has some work to do after failing its most recent health inspection.

Chef and owner Anthony Pitillo said most of the issues have been corrected and he is confident he’ll pass the follow up inspection.

Pitillo said the employee was wearing gloves while handling the dirty dishes, took them off, then put on new ones without washing his hands in between. He said that would be corrected.

“They know they’re supposed to wash their hands between glove changes,” he said.

According to the report, the inspector saw raw beef stored on top of a “cold well” of ready-to-eat foods.

Pitillo said the meat was actually stored on the same level as the foods. He said he bought a new refrigerator unit to store the meat to avoid the issue altogether.

The inspector found multiple items that were not stored at the correct temperature.

Pitillo said the items in question were lettuce, tomatoes and sauce that was “mostly sour cream.”

“Having tomatoes and lettuce and sour cream a little bit out of temperature is a far cry from having meats, things not thawed properly,” he said. “It’s unfortunate we still get docked the same amount.”

There was dust on the grill cooler unit.

Pitillo said that’s been the case for years and hasn’t been an issue until now.

“It’s been five or six inspections they’ve never told us that was a problem,” he said. “It’s not a food contact surface.”

The inspector, “Observed an accumulation of dried food debris on rack that clean food contact utensils are stored on ( underneath cold well).”

Pitillo said even if there hadn’t been an inspection, he’d still be fixing the things that are wrong in his kitchen. He said the inspections are a “snap shot” of conditions in the kitchen at the time of the inspection. Previously the restaurant scored an 86, and before that it scored a 96.