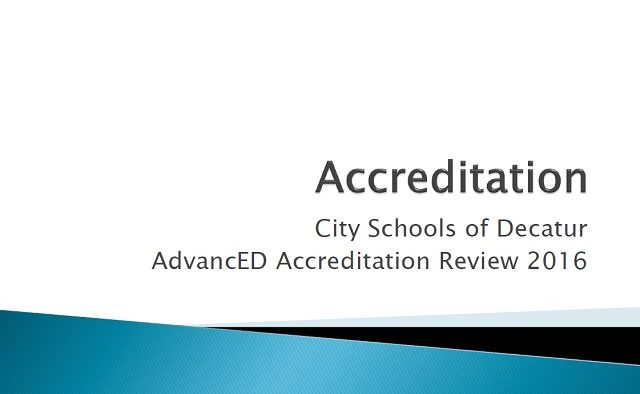 City Schools of Decatur reported in March that its accreditation had been renewed for another five years.

The accreditation report makes note of areas where CSD can improve. The school system did receive high marks overall. One School Board member concluded at the end of the meeting that the accreditation process was a “useless” exercise because some of the report’s recommendations are hard to interpret.

Chief Operating Officer Noel Maloof gave a presentation on the report during the June 14 School Board meeting. He explained that the accreditation review team identified three issues as an “improvement priority,” meaning it has to be addressed within two years.

Accreditation is a basic measure of a school system’s credibility and the review is conducted by  AdvancED. A review team from the organization visited CSD schools in March. Maloof said AdvancED has changed its procedures for accreditation. Instead of issuing accreditation warnings and putting systems on probation, which is what happened to DeKalb County Schools in 2012, AdvancED identifies improvement priorities within each review.

“What they do now is say you will continue on with your accreditation you may need to look at these priorities,” Maloof said. “It’s not a probationary practice. They say, ‘Here are the things you need to do and get back to us.’ It’s a lot less punitive situation we’ve seen in the past.”

The improvement priorities identified in the accreditation report are:

– Develop and implement appropriate programs and structures systemically to ensure that each student is assigned an adult advocate to enhance his/her educational experience.

“The [External Review] Team determined from three sources … that although advisement programs were somewhat evident at the high school, advocacy programs designed to ensure that each student is well-known by at least one adult on campus, did not exist in the elementary and middle schools,” the report says.

– Develop and implement a system improvement process that includes the review, revision, and communication of the purpose and direction statement, engaging representatives from all stakeholder groups in the process.

The report also says,  “The Team determined … that a comprehensive system improvement process was not in place. The superintendent indicated, however, that the system was in the process of developing a strategic plan for the next five years, which will include strategic goals, as well as the review, revision, and communication of the system’s purpose and direction.”

The development of the strategic plan will provide an opportunity to address issues raised in the report, Superintendent David Dude said.

“This whole accreditation process was infused into the strategic plan,” Dude said.

The report identified several areas where CSD had below average scores, but the school system received higher than average scores in many other categories.

School Board member Lewis Jones questioned the usefulness of the report in helping the school system improve.

“It was such a frustrating useless process,” Jones said. “I think one of our principles in the strategic plan [is] we need to be willing to accept an external review, but this report is just so bad that it’s hard to figure out what’s a valid criticism, what’s meaningful, what’s not. You almost conclude you have to throw it in a garbage can and say, ‘We got our accreditation,’ and move on. It’s just not a very useful document. It’s just not.”

Here is the full report from AdvanED and Maloof’s Power Point presentation from the June 14 meeting.