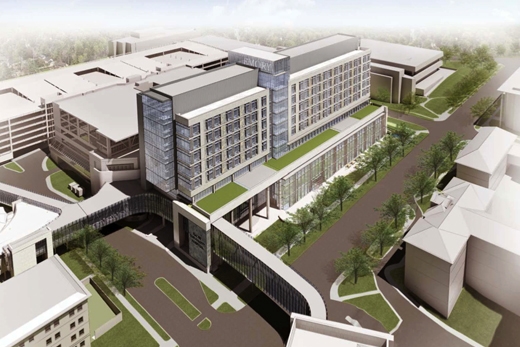 From Emory University: "This rendering shows Clifton Road in front of Emory University Hospital's new J wing, which is under construction now. The Clifton Streetscape project includes widening the road and adjacent sidewalks, which will be separated from the street by landscaped buffers, among other improvements. As part of the hospital construction, a new, two-story pedestrian bridge will be installed over Clifton Road."
Share

From Emory University: “This rendering shows Clifton Road in front of Emory University Hospital’s new J wing, which is under construction now. The Clifton Streetscape project includes widening the road and adjacent sidewalks, which will be separated from the street by landscaped buffers, among other improvements. As part of the hospital construction, a new, two-story pedestrian bridge will be installed over Clifton Road.”

The new plans are a step in the right direction, but they suffer from a fatal flaw: they make no significant accommodation for people on bikes. Emory’s administration should heed the rising chorus of calls and do its utmost to rewrite those plans and install protected bicycle infrastructure along Clifton Road.

Bikes are a key part of the Atlanta metro region’s transportation future, and Emory was once a leader in bicycle transportation. It was one of the first twenty universities in the country to receive a Bicycle Friendliness Rating from the League of American Bicyclists. But it has fallen behind, not just compared to the many other universities that are building state-of-the art bicycle infrastructure, but also within the Atlanta metro region. Whereas Atlanta and Decatur are planning and installing networks of protected bicycle lanes, Emory University has done little in recent years to improve conditions for its many bicycle commuters.

Clifton Road is Exhibit A. At present, Clifton Road is marked with sharrows, those confusing road paintings that are supposed to inform motorists that cyclists have a right to occupy the entire lane. Unfortunately, studies have shown that sharrows may actually be more dangerous for people on bikes than no facilities at all.

One small stretch of Clifton Road does have some painted bike lanes, but they are narrow, exposed, and filled with cement and debris. 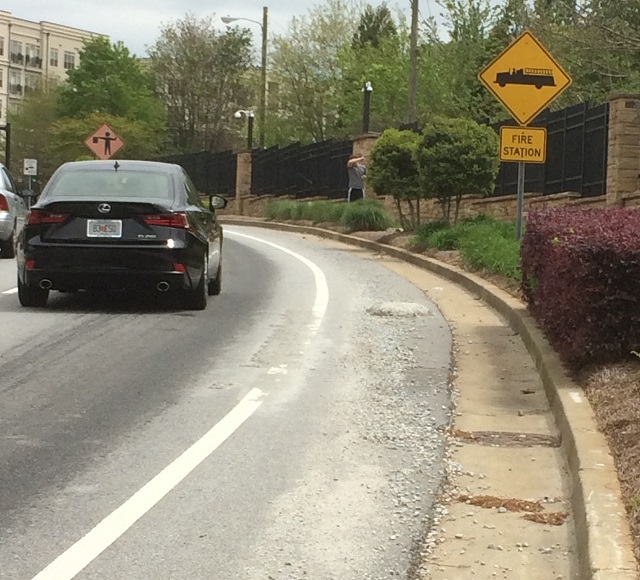 The new Clifton streetscape plans offer no improvement. They call for a painted bike lane on one side of the street. The other side would still have sharrows.

Neither painted bike lanes nor sharrows are adequate, which is why most cities are focusing on building protected bicycle lanes. Atlanta’s ambitious bicycle plans, for example, call for a network of protected bicycle lanes that will allow people of all ages and levels of fitness to navigate the city safely on a bike. The stunning success of the Beltline illustrates that there is a huge pent-up demand for safe places to ride bikes. The cities of Decatur and Avondale Estates also have exciting protected lanes in various states of planning. In this, they reflect growing trends in America, where protected lanes are sprouting up in metros from coast to coast. (See “Inventory of Protected Bike Lanes” by People for Bikes.)

Research has shown that separated lanes not only provide more physical protection; they also provide a feeling of security, which encourages more people to get on their bikes, creating a virtuous cycle. (See “Protected Bike Lanes 101” by People for Bikes.) The goal is to make bike lanes that are safe for all people to use. Mere paint does not suffice.

Emory University must not miss this opportunity. The expensive new plans for Clifton Road should be revised to protect people on bikes. Then Emory can once again take its place as a leader among bike-friendly universities, growing along with bike-friendly Atlanta and Decatur.

To view and/or sign a petition calling on Emory University to revisit the Clifton Road plans, click here.