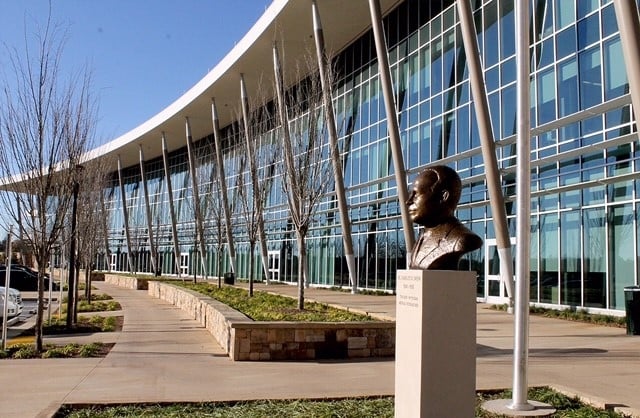 Dr. Charles R. Drew was the namesake of Atlanta’s first charter school. A sculpture of Drew was unveiled at the school on Feb. 25, 2016. Photo provided by Drew Charter School

As the Drew Charter School’s leadership plans to reapply for its charter, it is considering changing enrollment preferences for siblings.

It’s a change that’s upsetting parents of children who attend the school who have younger children who have not yet enrolled. Drew Enrollment Chair Carol Naughton said says the changes are intended to help the school refocus on its mission of helping underprivileged students.

“Over time our school has become more economically diverse and that’s a great thing, but in the lower grades we have many fewer kids who come from lower income families than we like to have,” Naughton said. “Forty percent of the kids in the early grades apply for free in reduced lunch.” Drew’s Board of Directors, want the percentage of free and reduced lunch students to be at least 65 percent.

In the pursuit of that goal, some parents say that Drew is reneging on its promise to give priority to siblings of current students.

“This change profoundly effects my family,” Drew parent Stacie Davis said. “Part of my vision for my children’s education was for them to be educated in Drew’s cradle-to-college environment. My youngest son would be starting Drew as my oldest daughter would be going into 6th grade. I do not want to transition my daughter at that time in her development.”

Fielding Shaw DeCoursey said the proposal has been stressful for her family as well.

She has a rising first grader at drew who has a sibling attending the East Lake Early Learning Academy. DeCoursey recently sent a letter to the school’s Board of Directors.

“My sincerest hope is that you, as a team, come up with a solution that works for everyone,” she wrote. “I would love to see you honor the promise that has been made to every Tier 3 family currently enrolled at ELELA. We all sign paperwork and we all enter with the understanding that we are going directly to Drew. I can understand drawing the line for new parents and explaining the new policy, but I implore you to honor that commitment to this (probably smaller than you think) group of people.”

Tier 1: The Villages of East Lake

Tier 3: The city of Atlanta.

Under the proposed changes, siblings would be served according to their tier.  In addition, Drew would also use a “weighted lottery” system to give more opportunities to economically disadvantaged children.

“Our expectation is we would use the weighted lottery strategically per grade and per tier,” Naughton said.

Preference is currently given to children of teachers and board members, and there’s no indication that will change. Naughton said there are about “30 teachers’ kids” at the school.

“We love being a family school,” she said. “Think about the kind of message when the teacher doesn’t think the school they teach at is good enough for their kids.”

“There’s lots of pressure on the school to serve as many kids as we can,” she said.

Naughton said after some “good, robust discussion” at a recent board meeting, the board directed the enrollment committee to reexamine all the options regarding sibling preference.

Davis said she was promised sibling priority when she moved out of Kirkwood. She has a rising 4th grader and a rising 2nd grader at the school.

“I was told as long as I stayed in the APS Atlanta area, I would be safe,” she said. “My husband and I planned our move around being able to stay in the Drew zone. This change would change our children’s lives in a way we did not expect. I understand life is filled with unexpected situations. The difference is, this is our school community we trusted, and they cannot just turn us away. By telling me that because of where I live, my youngest child can’t get in, is not only unfair, but it’s a terrible decision for the children. I thought school was about what’s best for the children, not what’s best for numbers and neighborhoods. Gentrification is the elephant in this room that no one will say out loud. That’s the push to cut out Tier 3 families and we will not stand for it. ”

DeCoursey said no one disagrees that Drew’s primary mission is to serve underprivileged children. She questioned whether the proposed changes would have the effect that Drew’s leadership intends.

“Other than the portion of the proposed charter that allows Drew to look at all candidates in the lottery and weight them based on who would be considered underprivileged … , I fail to see how the changes meet those needs,” she said. “From what I understand, the East Lake Villages have always had priority and they are currently enrolling 100 percent of those students that apply.”

Naughton said the enrollment committee is exploring all options, including grandfathering in siblings of current Drew students and applying the new enrollment polices to new families.

“Our committee will meet next Tuesday or hopefully we’ll have another recommendation,” she said.

According to a presentation at a recent meeting about the changes, Drew plans to submit its charter renewal to Atlanta Public Schools by July 25, and the Atlanta Board of Education could vote to approve it in September.