Kirkwood neighborhood suspicious after tip about plan to change boundaries

Kirkwood neighborhood suspicious after tip about plan to change boundaries The Kirkwood Neighbors’ Organization has gone on record stating it opposes any attempt to redraw the neighborhood’s boundaries.

It’s an open question whether there is a plan to do so.

Earl Williamson, the environmental and beautification chair for the Kirkwood Neighbors’ Organization, said there’s a plan in the works to move Coan Park into Edgewood. Williamson said the KNO received a tip from someone in the city’s Planning Department that the plan was moving forward. Williamson decline to identify the tipster. District 5 City Councilmember Natalyn Archibong said there’s no such plan being considered.

“The conspiracy theorists have run amok,” she told Decaturish.

All the same, on May 10, the KNO formally voted to oppose any changes to the neighborhood’s boundaries.

“The Kirkwood Neighbors Organization (KNO) finds the historical record is clear regarding Kirkwood’s boundaries, both as an incorporated city 1893-1926 and as a distinct City of Atlanta historical neighborhood on the National Historical Register,” the motion passed by KNO says.

Williamson said the possibility of moving Coan Park into Edgewood was first raised two years ago, but it didn’t go anywhere.

He provided an email he sent to Archibong in 2014 discussing the proposal. He said in that email it had been proposed at least three times before 2014.

“The proposal received no support whatsoever from those I spoke to in Kirkwood’s park, community garden, and green space community,” Williamson wrote in 2014.

The issue bubbled up again after the anonymous tipster contacted KNO representatives.

But what would be the motivation for moving Coan Park into a different neighborhood in the city of Atlanta?

“I don’t know,” Williamson said. “In the practical sense there’s little to be served by having X number of parks versus not having X number of parks. The value of parks acreage depends on what your neighborhood is willing to put into it. It’s always been of value to Kirkwood because we put a good bit of investment into it. Edgewood has historically not done that with their parks. In theory it would help property values in Edgewood. It’s all theoretical, based on the fact that more parks and greenspace elevates property values. That circles back to how much the neighborhood puts into their parks.”

Williamson provided a copy of a map from 1981 that appears to show Coan Park as belonging to the Edgewood neighborhood. To see the map, click here.

Here is the relevant portion of the map, with the red arrow pointing to the approximate location of Coan Park. The black boundary line divides Edgewood and Kirkwood. 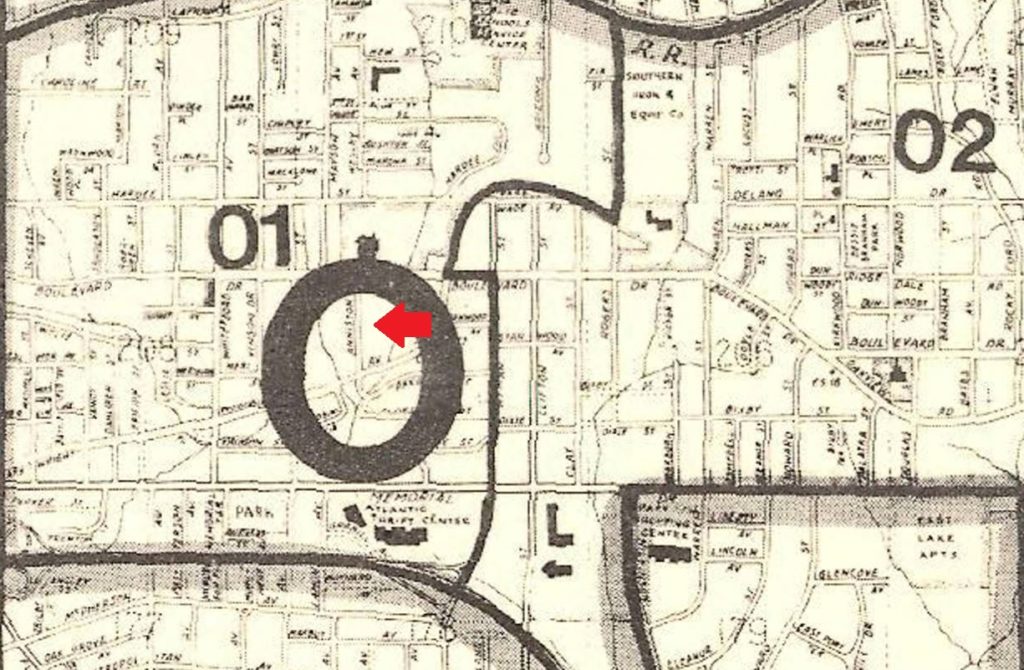 Williamson said he suspects this is the map that’s being used to justify the proposed boundary change.

“Reportedly only one person in Edgewood is pursuing this based on a 1981 map clearly labeled ‘Data Collection Areas’,” Williamson said.

The bulk of the other maps cited in the KNO’ motion identify Coan Park as being part of Kirkwood.

Archibong said there’s nothing to the neighborhood’s suspicions. She blamed the controversy on social media speculation.

“I really wish there was some sort of fact-checker on Facebook,” Archibong said. “Unfortunately, there is not.”

Geoff Mueller, president of the KNO, said he is not sure what’s driving the controversy, other than the anonymous tip from the Planning Department.

“That prompted us to do that May resolution, to remind people in public positions of historical records and kind of what’s gone on in the past, and remind ourselves,” Mueller said.