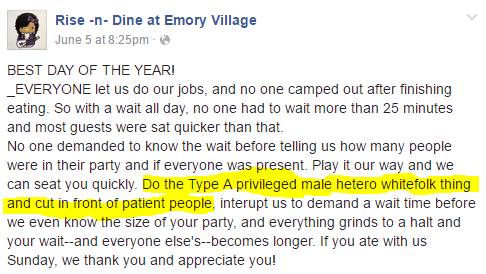 The Rise-n-Dine at Emory Village restaurant is under siege over a post on the company’s Facebook page that takes aim at “privileged male hetero whitefolk.”

It’s no longer visible on the company’s Facebook page. One of the company’s owners, who identifies himself as a white male and as George, declined to give a last name. He confirmed he made and then deleted the post. The post touched on the subject of white privilege, the concept that white people who are not overtly racist still enjoy advantages because of their race.

The post sparked accusations of racism and a campaign to downgrade the company’s reviews on Facebook. Some white men who reacted to the post on Reddit said they will not be supporting the restaurant.

“I took it down because it was not producing dialogue,” George said.

The post, made June 5, was actually celebrating one of the better days at the restaurant. “Everyone let us do our jobs and no one camped out after finishing eating.”

Later the post adds, “Play it our way and we can seat you quickly. Do the Type A privileged male hetero whitefolk thing and cut in front of patient people, interrupt us to demand a wait time before we even know the size of your party and everything grinds to a halt and your wait – and everyone else’s – becomes longer.”

After some readers of the post objected to the language, George doubled down.

“Yes women do it. Yes blackfolk do it, but some 90 percent of the time it’s a white male,” he wrote. He later wrote, “It’s about the 5 percent of people who cause 98 percent of our stress and they are almost always white males.”

Decaturish asked George if white men are welcome at his restaurant.

“Of course you are. There are lot of them and I am, and that’s my mistake,” he said. “I didn’t say Type A heterosexual males are not welcome in the restaurant. I said they’re the ones that usually cause the problems.”

George spoke passionately about the issues surrounding white privilege. The post itself was an example of it, he said.

“The fact I owned that is an exercise in white privilege, because if a black-owned restaurant had posted that, you know, dot dot dot,” he said.

He said he also took the post down because he didn’t want his coworkers to deal with the harassment it generated.

“I was afraid my coworkers would have to deal with it too much when I’m not here,” George said. “I did it. I need to take the heat.”

George said in the current social climate, specifically rise of Donald Trump as the Republican presidential nominee and the Brock Turner rape case, has made customers ruder.

“Something had to do with the social context right now of Trump, just getting the nomination, the Brock Turner case and all of those people who lately come in being so rude,” George said. “The absence of those people made everybody’s experience so much better. I said if we lose some people everybody’s going to be better off and we’ll bonus our staff if it hurts them.”